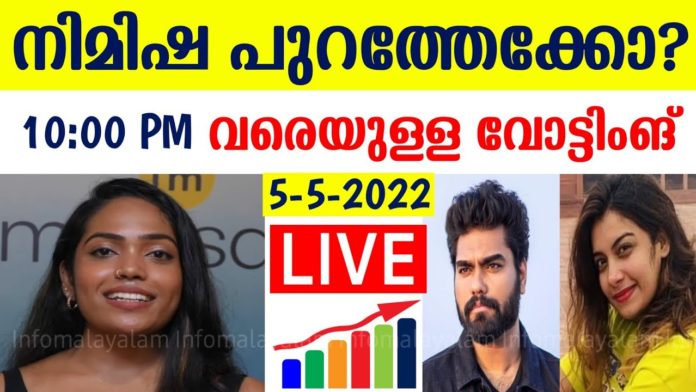 Bigg Boss is a favorite reality show of Indian miniscreen audiences. The show started in Hindi and later expanded to other South Indian languages. Bigg Boss will be launched in Malayalam in 2018. The first part was able to gain a good audience acceptance. Bigg Boss Season 4 is currently airing in Malayalam. The show, which started on March 27, is moving ahead with an eventful run.

Bigg Boss Season 4 has entered its sixth week. The competition is tightening as we approach the 100th target day. This time the games are different from the previous seasons. The game has received the most criticism in recent seasons. But this time it has been fixed. The Bigg Boss show, which started with 17 members, now has 12 members.

The Secret Room is on the Bigg Boss show this time around. Someone selected from the contestants will be temporarily taken to that room. They can be there and secretly see the movement of others. After two or three days, they will be returned to the house. But do not tell the contestants about that room or what they saw there. Nimish went into the Secret Room. I was there for two days and came back after watching the game.

Now is the time for Bigg Boss to break the law. Bigg Boss had strictly instructed not to tell the House members about the secret room. But this has been violated. What he saw in the secret room during a fight with Robin was revealed. Nimisha’s argument was that Dr. Robin tried to target Lakshmi Priya. Nimisha also revealed that he had seen Daisy and Robin talking.

The issue began after Robin alleged that he was falsely campaigning for the nomination to break up a group in the House. Lakshmipriya had also said that the nomination campaign was against her under the name of LP Target.

It was after this that Nimisha revealed about the episode he saw in the Secret Room to prove that he was the one behind this campaign. Nimisha said she saw in the episode Robin writing on the sofa to Daisy, who was out the other day as LP Target in the smoking room. This is the first time a contestant has publicly stated something he saw in an episode on the show. Later, the conflict came to an abrupt end.

At the same time, this revelation is likely to hurt the Nimisha. Before going to the Secret Room, Mohanlal also advised the contestants not to tell what they saw inside. Bigg Boss was reminded of the same thing when it was time to go back. This law is wrong.

Contestants may be expelled from the House for violating the law. Bigg Boss has expelled two people from the Malayalam show for breaking the law in the past. Only in the upcoming episode of Mohanlal will it be possible to know about the elimination. Sometimes he gives a warning. Nimisha is also in the eviction nomination this time.