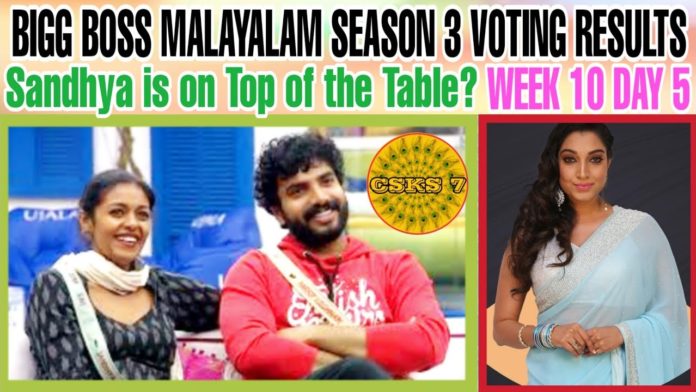 Bigg Boss Malayalam 3 edges towards the end of a crackling week 10. Amidst the high voltage drama in the house, the contestants grapple for the eviction suspense this weekend. The eighth elimination of Bigg Boss Malayalam 3 will take place on Sunday. However, the host Mohanlal has a lot to discuss and ponder up during the weekend episodes.

Surprisingly, the Bigg Boss house witnessed maximum drama in a week where Firoz Khan was missing. It was absolutely horrendous to watch Ramzan’s slipper saga, Rithu’s caste remark, and several other drama tales. Kidilam Firoz’s aggression against Manikuttan with the aim of breaking him will continue to up the ante in the house. However, the nominations for next week’s eviction are obvious from this week’s proceedings.

After a warning from Bigg Boss, the Naatukootam task continued but it lacked the competitive spirit. It was arguments and mental games galore in the tenth week of Bigg Boss Malayalam. It was a treat to watch some contestants like Anoop shed their comfort zone and voice out their opinions. The Natukuttam task has been passed with the gift of strength, vigor, and mutual enmity among the contestants.

Noby and Kidilam Firoz entered the bad books of the audience for supporting Ramzan’s slipper saga. Such decisions prove costly in the Bigg Boss house for contestants like Noby.

This week’s captaincy nomination featured three ladies. Sandhya, Remya and
Dimple Bhal was in contention to become the coveted female captain of the house. This is a very crucial task for Sandhya and Dimple considering their nominations. The nominations for the weakest contender will also decide the fate of eviction and nominations for the next week.

According to reports, Sandhya or Soorya Menon are the contenders for eviction this week.