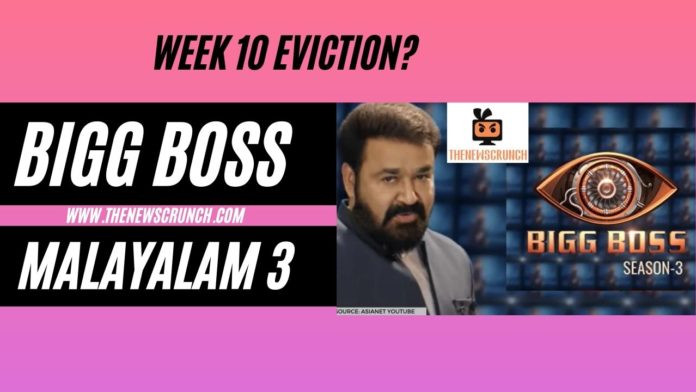 Bigg Boss Malayalam 3 will complete a fiery tenth week this weekend. The weekend episodes will be a guaranteed entertainer as Mohanlal tears into the controversies. The major highlight will be the announcement of the eighth elimination of Bigg Boss Malayalam 3.

Six contestants entered the nominations for eviction in week 10 8 of Bigg Boss Malayalam 3. However, the performances during the ‘Naatukootam task’ and subsequent fights about scoring impacted the voting results by great means. Seven eliminations took place so far but the eighth eviction will be a decisive one. Incidentally, all the evicted housemates so far are female contestants except Sajna and Firoz.

The voting results in battle were inconclusive until the final day in this week’s case. Two contestants were trailing by a considerable margin from day 1. Also, the performances in the lukewarm task were not entertaining to the audience. Hence, Soorya and Sandhya were subjected to danger and  Rithu Manthra joined the group.

There was a lot of commotion in the house this week with the desperation to stay. However, the captaincy task will decide their fate of eviction next week.

Sandhya Manoj is the likely eviction of week 10 in Bigg Boss Malayalam 3. Soorya is also losing his popularity and struggled in the bottom two of the voting results.