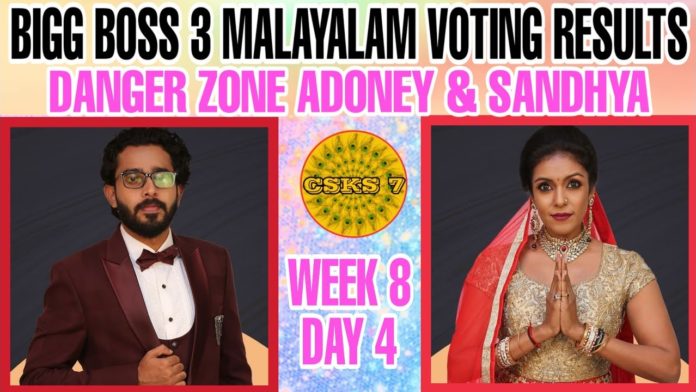 Bigg Boss Malayalam Season 3 is in the middle of a scintillating season. However, the luxury budget task during the eighth week failed to impress the audience. Sajna/Firoz continue to gain the maximum coverage on the show. However, their performances were a standout this week. Adoney, Manikuttan, and several other contestants pulled out a brilliant performance this week.

The drama surrounding this week’s ‘Talent show’ luxury budget task performances and return of Remya as wildcard entry is impacting the voting results by considerable means. Sandhya and Sai Vishnu continue to struggle on the brink of elimination and Adoney’s safety seem to be a huge positive for his prospects this week.

Captain Manikuttan was safe from nominations this week.

According to reports, Rithu Manthra and Sajna/Firoz are likely to be safe this week.

According to reports, Sandhya or Sai Vishnu is likely to be evicted this week.