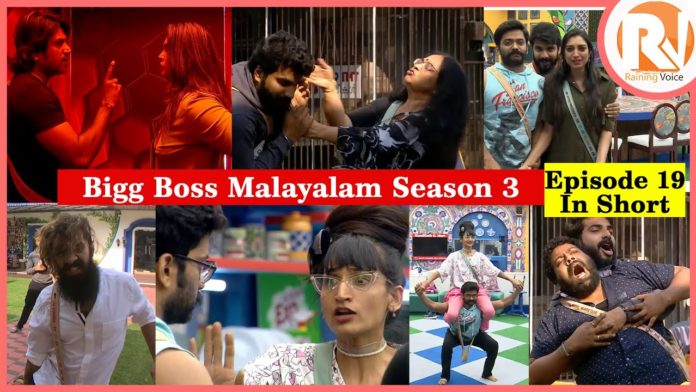 Bigg Boss Malayalam 3 is gearing up for an epic finale for the third week. There will be one eviction this weekend which will be announced by the host Mohanlal on Sunday’s episode. However, three contestants who were penalized with a nomination are in danger of eviction.

The highlights of this week were the gruesome fights among the housemates. Sai Vishnu faces the flak from the audience for his aggressive behavior after a calm first week. His fight with captain Manikuttan added salt to his injured popularity ratings. However, he will be safe for the sake of TRPs.

In Friday’s episode, Manikuttan brings a smile with his romatic duet with Rithu Manthra. Manikutta impresses the housemates as well as the audience with his epic singing. The positive highlight of this week was Rithu and Manikuttan’s performance. Angel is a huge fan of Manikutta and rose to popularity on her very first day.

Dimple Bhal is riding on the shoulders of the audience’s sympathy and support. She confessed about her bond with Majiziya. Firoz Khan mentions Sai Vishnu’s name. However, the lovely happy moments come to an end in the Bigg Boss house. A fight erupts between Majiziya and Rithu Manthra. The most common reasons for fights in the house are duty assignments.

The love track of this season continues as Angel Thomas and Adoney John share some cheesy moments. The final day of voting beholds the contestants of Bigg Boss Malayalam 3. The suspense around the next captain of the house looms large. However, Soorya and Manikutta were quite efficient in their captaincy assignments.

There is a high possibility of Michelle Ann’s eviction this week. The unofficial voting polls of Bigg Boss Malayalam 3 point towards the elimination of Michelle Ann.