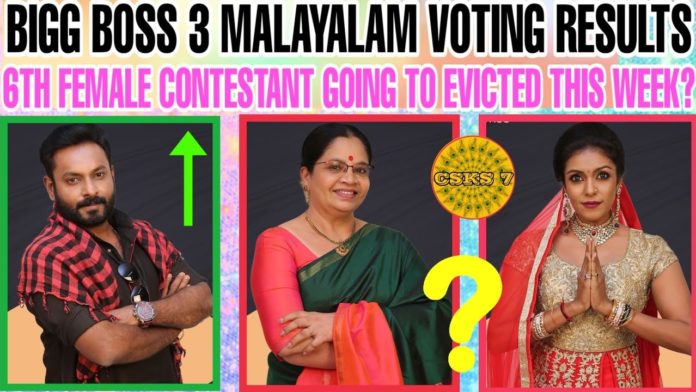 Bigg Boss Malayalam 3 will complete a drama-filled seventh week this weekend. The weekend episodes are graced by the host Mohanlal as he dwells in the happenings of the week. The major highlight will be the announcement of the sixth elimination of Bigg Boss Malayalam 3.

Six contestants entered the nominations for eviction in week 7 of Bigg Boss Malayalam 3. However, the performances during the tasks and fights impacted the voting results by great means. Five eliminations took place so far but the sixth eviction will be a decisive one. Incidentally, all the evicted housemates so far are female contestants.

The voting results in battle went down to the wire in this week’s case. Three contestants were trailing by a considerable margin from day 1. Also, their performance in the recently concluded task was below par. Hence, Anoop and Sandhya were subjected to danger and  Bhagyalakshmi joined the group.

Apparently, Firoz Khan’s ferocious attitude caused a vote drop for the couple. However, the captaincy task will decide their fate of eviction next week.

Bhagyalakshmi or Sandhya is the likely eviction of week 7 in Bigg Boss Malayalam 3. Anoop is also losing his popularity and struggled in the bottom three of the voting results.