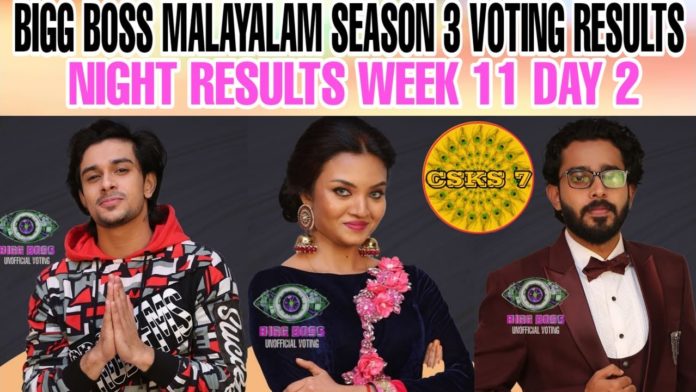 Bigg Boss Malayalam Season 3 is in the middle of the eleventh week filled with mixed emotions. The engaging reality show featured eight evictions of its contestants so far. While six contestants were nominated for eviction in week 11, two are in grave danger of eviction. Sandhya Manoj, Sajna/Firoz, Bhagyalakshmi, Majiziya Bhanu, Lakshmi Jayan, and wildcard entrants Michelle Ann, Remya Panicker, and Angel Thomas were the contestants who got eliminated so far.

The weekly task of Bigg Boss Malayalam Season 3 featured a ‘coin rain’ and fierce fight for safety from eliminations this week set the script for an eventful week. Sai Vishnu dominated in several unofficial voting result polls even after three consecutive nominations weeks. However, Kidilam Firoz makes his presence felt among the audience this week. Soorya lurks in danger with a threatening nomination this week.

The intense competition in the ‘coin collection task’ subsequent brawls is influencing the voting results significantly. There is not much change in the positions. From the beginning of the week, Adoney and Soorya are facing risk in the bottom two and there is not much excitement around the eviction battle.

The weekly task (Coin Collection task) and Manikuttan’s return were the major highlights of this week. Several twists and fierce competitiveness were at display during the task. However, there were no direct nominations this last week.

According to reports, Adoney and/or Soorya are likely to be evicted this week.