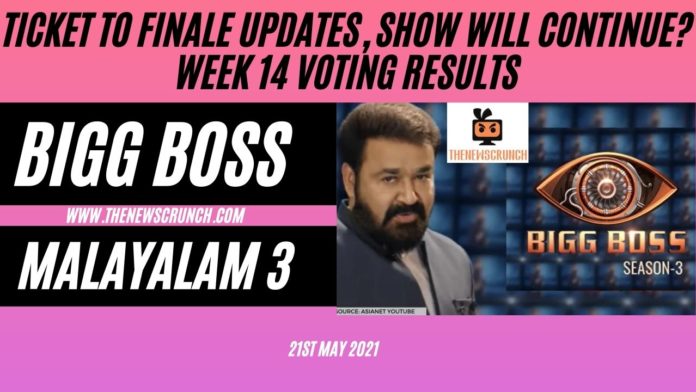 Bigg Boss Malayalam Season 3 will witness a suspense-filled end to its fourteenth week after the conclusion of the ‘ticket to finale’ tasks. The intense reality show faces the risk of closure after the Tamil Nadu police sealed the venue. However, the show makers assured the production will resume soon. The ‘ticket to finale’ tasks will conclude sometime this week. The elimination suspense will be revealed in the weekend episode based on the least voting results.

The performances in the ‘ticket to finale’ tasks are directly impacting the voting results and support from the audience. However, Noby is in the bottom two and Kidilam Firoz’s safety seems to be a huge positive for his prospects this week. It will be interesting to see who will be the first finalist of Bigg Boss Malayalam 3.

The entertaining ‘ticket to finale’ tasks and the open nominations were the major highlights of this week. However, Ramzan was the only safe contestant apart from the captain of this week.

According to reports, Kidilam Firoz and Sai Vishnu are likely to be safe this week.

According to reports, Noby is likely to be evicted this week.