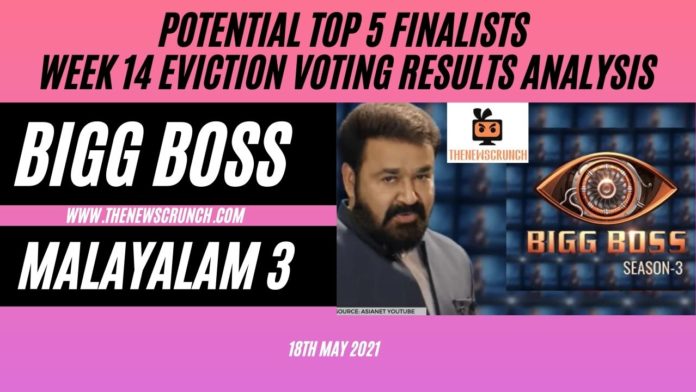 Soorya, Adoney John, Sandhya Manoj, Sajna/Firoz, Bhagyalakshmi, Majiziya Bhanu, Lakshmi Jayan, and wildcard entrants Michelle Ann, Remya Panicker, and Angel Thomas were the contestants who got evicted so far. Dimple Bhal’s return to nominations heats up things as Bigg Boss Malayalam elimination is back with the best of this season.

However, the bonhomie ended in the Bigg Boss Malayalam 3 house as the open nominations task took place this week. Hence, the quest for resilience and supremacy engulfs the Bigg Boss house this week.

The drama surrounding the extension of the show and the open nominations task is impacting the voting results by considerable means. Nobi and Anoop are lurking around in the bottom two and Dimple’s safety seems to be a huge positive for her prospects this week. However, will she succeed in becoming the first finalist of Bigg Boss Malayalam 3?

Vote to save your favourite contestants
Make Beautiful Surveys Free

The open nominations task and the fights after the nomination of the top 5 finalists were the major highlights of this week. However, Ramzan was the only safe contestant apart from the captain of this week.

According to reports, Anoop or Noby are likely to be evicted this week.