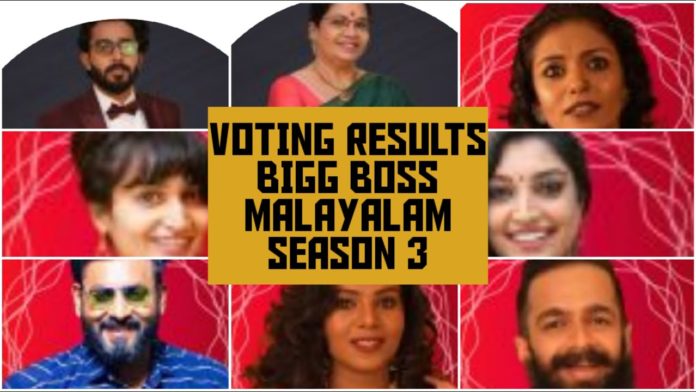 Bigg Boss Malayalam Season 3 enters its fifth-week amidst nominations task and an entertaining ‘role-play’ task. Seven contestants entered the dangerous path to elimination. However, only one will kiss goodbye to their Bigg Boss journey this Sunday. Lakshmi Jayan and wildcard entrants Michelle Ann and Angel Thomas were the contestants who got evicted so far.

An entertaining nominations task and a touch of gruesome fights set the tone for Bigg Boss Malayalam 3 this week. However, a captivating ‘role play’ task was announced by Bigg Boss after the success of last week’s college task. The contestants are dressed as one famous character from the Malayalam industry.

After two consecutive weeks of nominations, Manikuttan and Soorya Menon were safe. However, Rithu Manthra reentered the nominations after a week’s break. Sajna and Firoz are making waves among the audience with their stellar performance.

The drama surrounding this week’s character task performances is impacting the voting results by considerable means. Rithu Manthra and Remya Panicker are lurking around in the bottom two and Kidilam Firoz’s safety seems to be a huge positive for her prospects this week.

The character task and nomination task was the major highlight of this week. All the contestants were eligible for nominations this week. However, there was a tough competition for safety this week.

According to reports, Remya Panicker or Rithu Manthra is likely to be evicted this week.