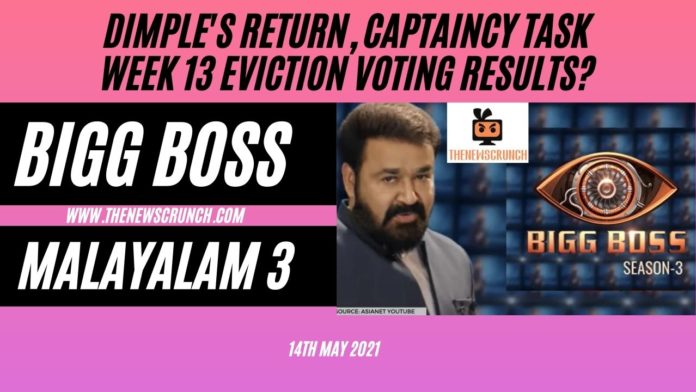 Adoney John, Sandhya Manoj, Sajna/Firoz, Bhagyalakshmi, Majiziya Bhanu, Lakshmi Jayan, and wildcard entrants Michelle Ann, Remya Panicker, and Angel Thomas were the contestants who got evicted so far. The return of Dimple Bhal spices up things as Bigg Boss Malayalam is back with the best contestants.

The Eid bonhomie will continue this weekend which will also trigger mixed emotions in the house. Hence, Bigg Boss Malayalam Season 3 did not have a nominations task this week. However, the extension of the show by two weeks opens up the plot for a fiery week.

The drama surrounding the return of Dimple Bhal and the captaincy task is impacting the voting results by considerable means. Ramzan and Ramya are lurking around in the bottom two and Manikuttan’s safety seems to be a huge positive for his prospects this week.

The return of Dimple Bhal and the fights after the puppet task were the major highlights of this week. There is a high chance of direct nomination for the next week of eviction.

According to reports, Sai Vishnu is likely to be safe this week.

According to reports, Remya or Ramzan are likely to be evicted this week.