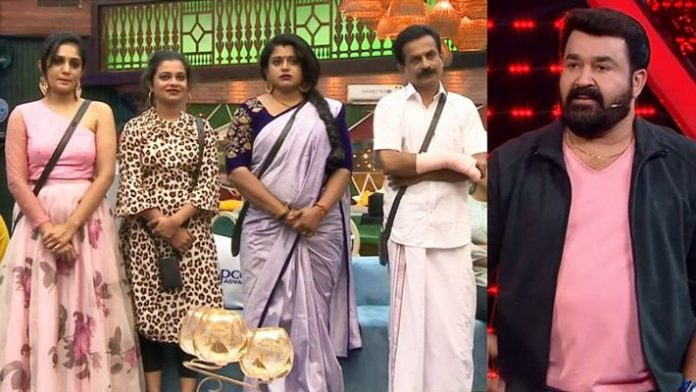 Mohanlal announces continuation of two eliminations in the eight week of Bigg Boss Malayalam Season 2 Arya, Veena, Fukru, Jasla, Sooraj and Rejith were on the eviction list. On Saturday, Mohanlal had earlier said that Fukru was safe this week. Earlier, Mohanlal had announced that Suraj would be out of the remaining five. But this week’s elimination didn’t end in one.


Mohanlal told the four remaining members of the list after Suraj. Mohanlal asked Jaslal if he felt that using the ‘Elimination Free Card’ was enough now. Card Jusla had used earlier. But Jasla replied that she did not think so. Mohanlal also announced the second elimination this week. Mohanlal called Jasla after Suraj.

Mohanlal told Jasla that if anyone had anything left to say, he would say. But Jasla’s reply was that she was told at the time and there was nothing left. Jazla, meanwhile, told the audience. ‘I was the only person in all these days at Bigg Boss House. No one else has tried. Upon arrival here was expected two weeks. It’s been five weeks. My emotions have shown naturally. It was like living in the House for 24 hours. I don’t know what went out of it in an hour, ”Jasla said. Then Jasla went out, asking each of them personally.