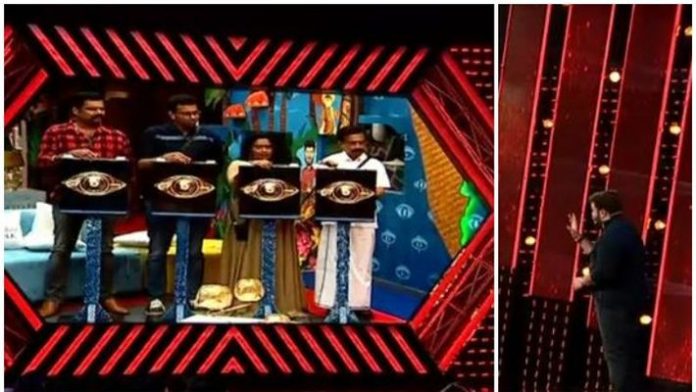 
Yesterday Mohanlal revealed Veena Nair was in the safe zone. Arya was also kept out of jail. The prospect of getting out today has increased. Mohanlal told everyone to stand in front of the judgment card. Everyone stood in front of a card with their name written on it. They were Rajith Kumar, Pradeep Chandran, Manju Peter and Sooraj. He told him to open the card. Rejith Kumar and Sooraj in the safe zone. Manju Peter, Pradeep Chandran Danger Zone. When asked what would happen, some said that it was possible for someone to leave. However, some people said that there is no chance of anyone leaving the house due to eye infection.

Once again, Mohanlal came to the screen. He told Fukru to go to the outside room. When Fukru arrived, Manju Peter was there. With a hug, Fukru led Manju back to Bigg Boss house. Upon returning home, Manju asked where Pradeep Chandran was. When Mohanlal said that Pradeep Chandran was nowhere, it was clear to the audience who was out. Pradeep Chandran left the house.