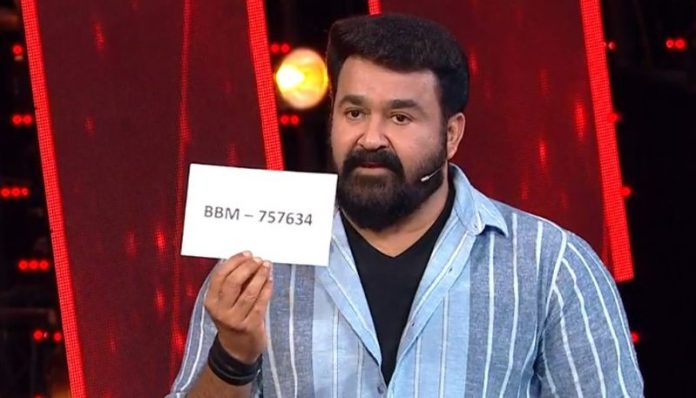 New Eviction in Bigg Boss Malayalam Season 2, five contestants were nominated on the ninth week elimination list. Alessandra, Sujo Mathew, Pashanam Shaji, Veena Nair and Amrita-Abhirami Sisters (both are considered by Bigg Boss as one contestant). Mohanlal’s eviction announcement was made in a curious manner.


Those who were on the elimination list were invited behind the stands lined up by Mohanlal. Large specimens of lottery tickets were placed in front of each other. Then he read aloud numbers that resembled lottery tickets. Mohanlal had to look at the person’s name and read it.

Accordingly, Alessandra had the first number given by Mohanlal. Sandra scratched on the card and found it written “Safe”. The next number was with Sujoy and the number one followed by Amrita-Abhirami sisters. When they both scratched, they got the message ‘Safe’. After taking a break, Lal revealed who Shaji or Veena were leaving.

He then put two numbers together. But Shaji himself, on his ticket, first discovered a number that Mohanlal said. Veena was watching the action without scratching her. Shaji got a message called ‘Safe’. Veena has finally received a message called ‘evicted’. With this, Veena Nair was knocked out of the Bigg Boss Malayalam Season 2 by an eviction Many of the contestants, who had started with poor eyesight, had to stay out of the House for several weeks. She was a strong contender.