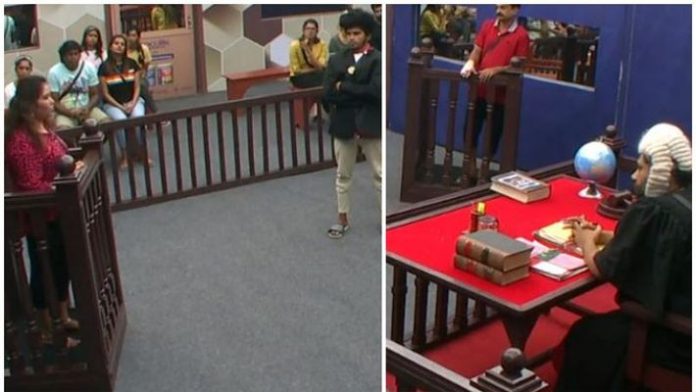 Big Boss makes each task interesting. Each of these tasks gets you a luxury budget point and an individual point. Therefore, tasks can be conflicting and reach into arguments. Today’s task was to take place in the courtroom. The task was to complain and to sue.


Bigg Boss was the first to say that he wanted a peaceful atmosphere. Therefore, they were told only to laugh. This was to prevent things from escalating into conflict. Anyone can file a complaint. The complainant can be said to be a judge. The lawyer against whom the complaint can be filed may be referred. If the complainant wins, he gets 100 points. If he loses, he loses 100 points, and he or she receives a complaint against him. The lawyer should also be given 50 points.

The first complaint was that of Remit Kumar. The complaint was against Dayaswati. The complaint was that Daya Aswati was committing suicide. Rajith Kumar said his reputation goes. Raghu was the judge. Fukru was the advocate of Daya Aswati. The argument started. The judge heard the plaintiffs first. “When she first went to the outside hospital for treatment of an eye infection, Daya Ashwathy, who was very close to him, but later turned against me,” he said. Regita said that she was close when Daya Aswati was single and that she helped Bigg Boss become an activist at home. Daya Aswathi said no one was isolated. Dayaswamy told reporters that Rijit Kumar was trying to get close to her when no one was watching. He said to dye when there was no one. Rejith stood up to fight. Daya Aswathi asked if she was concerned about her reputation and would have been willing to fight a girl.

The judge interfered in the words of Daya Aswati. The judge asked if the defendant had anything to say about the plaintiff’s claims. Fukru, the lawyer, started the argument. Fukru asked Reggit a question, saying yes or no. Fukru was blocked when Rezit Kumar tried to answer the question in broad terms. Fukru asked if it was only after she returned home that her eyes fell ill and Daya turned against her. Meanwhile, Rajit Kumar said that the lawyer was acting as a childish person. Raghu said the judge had a say in the conduct of the lawyer. Aswathi said that she had done so when Regit started talking badly about her. But first, it was kind of bad, ”said Rajith. According to Dayaswati, she was acting in an incident where Bigg Boss officials said that her return should be dramatic. Daya Ashwati said that Bigg Boss had asked her to do some acting. It was part of the task. Fukru, the lawyer, said, “It is clear that it is a task.

Bigg Boss asked the judge to ask if there was justification in the complaint. He was asked to answer in one word. Accordingly, Raghu asked the viewers whether the complaint was legitimate. Everyone replied. In view of the opinion of the majority of the respondents, the decision of the judge was unreasonable.