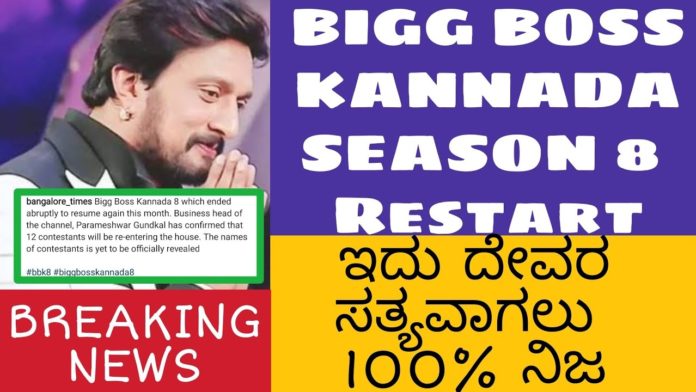 Big Boss Kannada Season 8 reality show, which has been halted due to COVID 19 second wave, has received an update from the channel. Viewers were delighted that a photo shared on the social networking site Colors Kannada today (June 16) showed that the Bigg Boss would continue. However, there is another interesting aspect in this photo: the onlookers were wondering what was inside it.

Though the news of the Big Boss Kannada 8 restarting as soon as the corona epidemic began to reduce, there was little doubt about whether or not it was true. There was also confusion as to whether the game’s behavior would not change everything if all the contestants had already left the house once again. But now that the channel has hinted at this, Bigg Boss is sure to continue.

However, there is a great twist in this clue. Because of this, there were 10 people in the house, including Aravind KP, Manju Pavagada, Shamanth Bro Gowda, Chakravarti Chandrachud, Raghu Gowda, Shubha Poonja, Vaishnavi Gowda, Divya Suresh, Priyanka Thimmesh, and Nidhi Subbayya. Divya Urugudu was not eliminated but was discharged due to illness. Even if she were included, the show would be with 11 people.

This means that if the Bigg Boss can continue now, these 11 people will be entering the house. However, there are 12 suitcases in the photo shared by the channel, which has left viewers curious about who the other contestant is. According to some, there is talk of a wild card entry to the game as the game restarts.

According to sources, Bigg Boss is set to launch at the end of June, with the show continuing in a new way. This idea has been given to fans by now. Now, if Bigg Boss resumes, the possibility of further expansion without limiting it to the remaining 30 days cannot be ruled out.

Channel head Parameshwara Gundkal has reported on the reboot of Bigg Boss on his social media page.