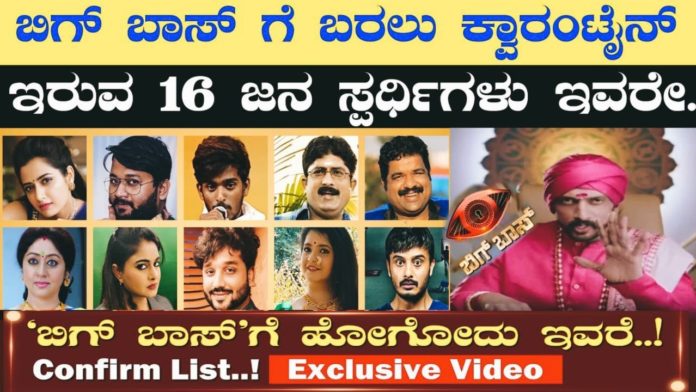 Bigg Boss Season 8 is just days away from the long-awaited Kannada audience. How do acting emperor and fan-favorite Kiccha Sudeep appear in the opening of Bigg Boss 8? Who gets into the house as contestants? This curiosity is for all Big Boss fans how entertaining new guests can be. Television viewers are also interested in whether their favorite celebrities are joining the Bigg Boss house.

Bigg Boss Season 8 will begin next week on Sunday 28th February 2021. Promos released, and the routine has begun. Here’s a list of potential Big Boss contestants for the eighth season.


Kannada actress Ashika Ranganath’s sister Anusha Ranganath is making a name for herself on the Bigg Boss contestants this time. Fans have been waiting for Bigg Boss to screen Anusha, who starred in Kannada films Life 360 ​​and Beautiful.

Ragini Dwivedi
Sandalwood actress Ragini Dwivedi has been rumored to be the contestant of Bigg Boss Kannada Season 8. The actress, who has been in judicial custody for 140 days on drug charges, is now out on bail. We will have to wait till the weekend to know if Ragini Dwivedi enters the Bigg Boss goes home.

Singer Hanumantha
The name of Hanumantha is also going across social media as a probable contestant for the upcoming season. People like his song, his lyrics, his words. The expectation is that the village boy Hanumantha will go to Bigg Boss house.