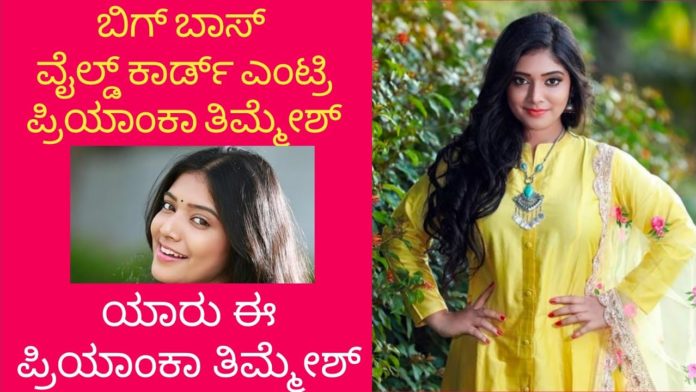 The Bigg Boss Kannada season 8 is running successfully with a lot of interest among fans. Fans are witnessing some kind of controversy every day, and this time the contestants are entertaining the viewers. It was only last week that Chakravarthy Chandrachud stepped into the Bigg Boss house as a wild card that caused the house’s atmosphere to change slightly.

This is why some of the contestants have expressed outrage over the arrival of newcomers. But Kuch Sudeep, who talked about wild card entry, hinted that more is coming. Now that is true; a new contender has stepped inside as the second wild card entry.

Bigg Boss has revealed the arrival of a new contestant in the promo. According to sources, the new contestant is known as Priyanka Thimmesh. It is of great interest that the heroine of Bhimasena’s Nalamaharaja movie has now entered Bigg Boss’s house. Priyanka Thimmesh, who made her debut in Kannada cinema through Ganapha in 2015, has also acted in a few other language films.

Everyone is curious as to how Bigg Boss will entertain Priyanka Thimmesh. Above all, some have found it amusing the fog awaiting the arrival of a new girl. However, only the fog is missing in the promo. Bigg Boss, who summoned Manju to the Confession Room shortly after Priyanka Thimmesh came to BB house, was not sent out. The contestants also searched in shock as to where the Manju had gone. With the arrival of a new contestant, Bigg Boss has seen another change in viewers’ curiosity.

Bigg Boss Kannada 8 Nominations: These eight contestants are nominated for voting in week 7