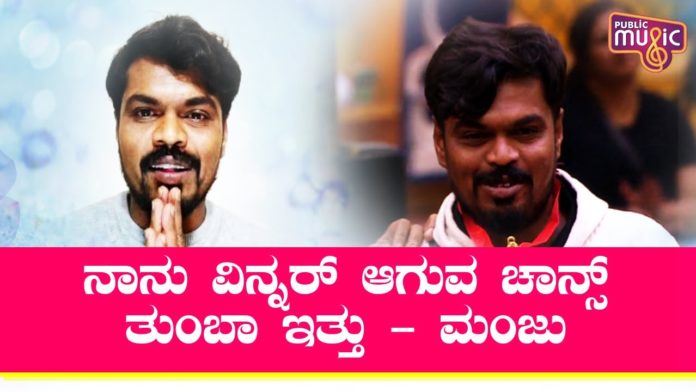 There is a trend in social media in favor of ‘all-rounder’ Manju Paavagada, who is ahead of both the entertainment and the task. This time the ‘Bigg Boss’ Winner trophy may be lifted by Manju paying homage to people with his comedy timing and one-liner punch? Why do viewers love Manju Paagada?

Manju Paavagada is the entertainer of ‘Bigg Boss Kannada 8’. For the first two-and-a-half weeks of the show, Manju took control of the Bigg Boss house with his comedy. If Manju Pavagada’s words were highlighted, the rest of them would be dull.

The only thing at the forefront of entertainment is the Manju never lagged in tasks. Arvind, who has a sports background, has a fierce rivalry in the task. In some of the tasks, Arvind has beaten Manju. Manju was broken when playing the game. When all the contestants are divided into two groups to be the weakest and strongest contestants, Manju is not the only one who gives the team the ‘strongest competitors.’ Manju Paavagada worked hard to cheer up everyone on his team and add to the victory lap.

Manju Paavagada is the two-time captain of ‘Bigg Boss Kannada 8’. Kichcha Sudeep has given him two applause. He is also considered the ‘best’ by the contestants. Manju Paavagada’s passion for cooking was also appreciated inside the BB house.

Manju’s friendship with many people in ‘Bigg Boss’ house. Divya Suresh is linked romantically to him inside BB house. Shubha Poonja and Manju Paavagada were also close friends until she got eliminated. Shubha Poonja affectionately called Manju ‘Champu.’ Along with Rajeev and Vaishnavi, Manju has become a friend.

Prashant Sambaragi, Chakravarti Chandrachud, Shamant have all fought with Manju. Manju Pavagada, who has spoken directly about what he thinks, has created a riot in the Bigg Boss house. Sudeep also advised him to work on finding peace inside the house. Later Manju tried to avoid fights and arguments.

Some viewers are annoyed over Manju Pavagada’s romantic drama with Divya Suresh. ‘Bigg Boss’ for Manju Paavagada is both sweet and bitter.

Manju Pavagada is a talented rural girl who participated in the ‘Maja India’ program. Growing up in the village, the desire to become an actor has come to Bangalore, and it’s not hard to list. Manju also worked in the petrol bunk. Of course, viewers love and fancy Manju Pavagada, who entertained all their hardships at the Bigg Boss house. According to Trend in Fan Following and Social Media, Manju Pavagada is the favorite contestant to win ‘Bigg Boss’ this time.

Arun Sagar, Sreejan Lokesh, Master Anand, Naveen’s outfit, Kuri Pratap, who entertained Bharapura in the house of ‘Bigg Boss,’ were not awarded ‘Winner.’ But this time, Manju Pavagada may win the title as more and more sources are pointing towards him being the winner.

TheNewsCrunch’s comment section is filled with comments from BBK8 fans, and most of them have predicted that Manju will win the title.

How to vote in Voot App for Bigg Boss Kannada 8 Online Voting?