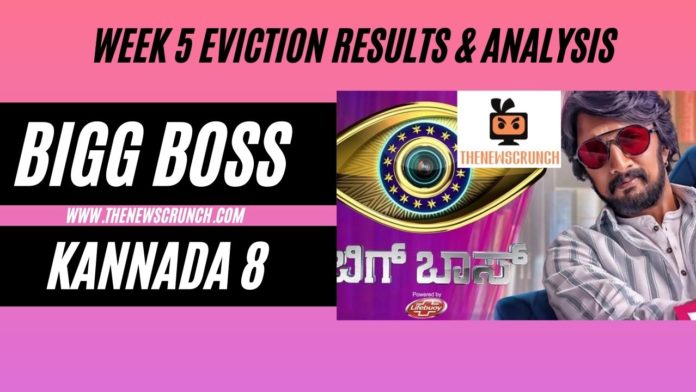 Bigg Boss 8 Kannada is concluding its fifth week with a controversial task and its allied consequences. However, the weekend episodes guarantee an electrifying time for the audience with host Sudeep Kichcha. The fourth eviction of Bigg Boss Kannada Season 8 will be announced on Sunday.

The voting lines for this week’s elimination opened late but the audience sprung into action from the same day.

This week’s elimination decision will be a tough one for the Bigg Boss makers. Prashanth’s indecent actions with Divya Urudaga has created ripples of negativity across the audience base. The audience are disappointed with his actions on national television with a young girl. On the other hand, Shankar is trailing in terms of the votes count with least votes.

Bigg Boss Kannada 8 voting window ended on Friday midnight. The fight for eviction safety was incredibly fought by the contestants. However, some contestants took up the challenge and gained immense coverage and popularity. Manju, Aravind, and Shamanth were the best performers of this week.

Manju continues to be the best entertainer in the house. Brogowda aka Shamanth revived his performance this week. Nidhi fails to gain the wrath of the audience along with Prashanth.

According to reports, Shankar is eliminated this week in Bigg Boss Kannada 8.