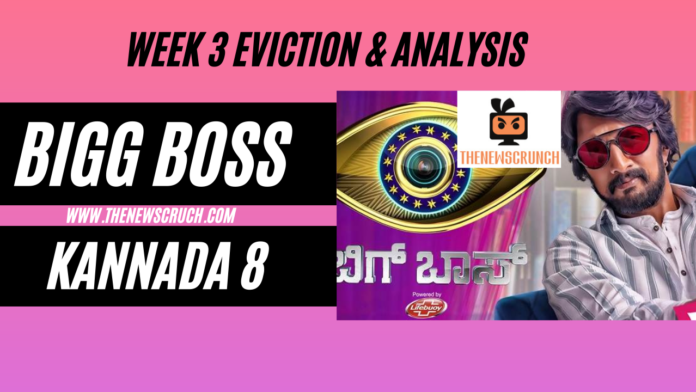 Bigg Boss 8 Kannada is concluding its third week with an impactful roundup of tasks, drama, and entertainment. However, the weekend episodes guarantee an electrifying time for the audience with host Sudeep Kichcha. The third eviction of Bigg Boss Kannada Season 8 will be announced on Sunday.

Bigg Boss Kannada 8 voting window ended on Friday midnight. The fight for eviction safety was incredibly fought by the contestants. However, some contestants took up the challenge and gained immense coverage and popularity. Vishwanath, Divya Urudaga, and Divya Suresh were the best performers of this week. Aravind was another standout this week with his impressive performances in the ‘Jodi task’ and ‘captaincy task’.

Manju continues to be the best entertainer in the house. Brogowda aka Shamanth became the worst performer and entered the jail. From being a prominent leader in the house, Shamanth Gowda fell in terms of popularity.

According to reports, Geetha Bhatt is week in Bigg Boss Kannada 8.

Bigg Boss Kannada 8 Finale: BBK8 finale in three weeks, will there be double elimination this week?