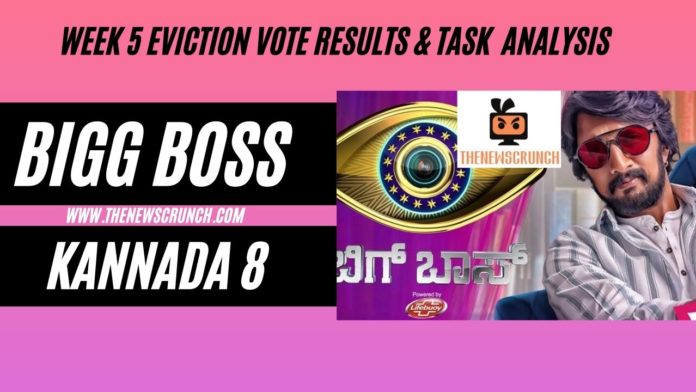 Chakravarthy was the first wildcard entry for this season. Being a crime reporter by profession, the scene might heat up things in the house. The dedication towards tasks and strategies is lacking in this bunch of Bigg  Boss Kannada contestants. Chakravarthy gave a mask for each contestant depicting his observation of them from outside the house.

Chakravarthy will play a major role in setting a higher benchmark for the contestants. However, it will be interesting to see if the contestants will allow him to take the upper hand in things in a settled house.

According to reports, the week 5 eviction will feature the first male contestant to be evicted. Shamanth finally picked up his game with good task performance. This comes in at the right time as he was struggling during the last two weeks. Shubha Pooja is hanging in the balance between eviction and safety. However, two other contestants below her in terms of voting share might save her this week.

Shankar and Prashanth are the weak links of this week’s nomination. It is clear that one of them will be eliminated in Sunday’s episode. On the final day of voting, we anticipate lesser changes in the voting results for the fifth week. However, Bigg Boss can always spring a surprise.