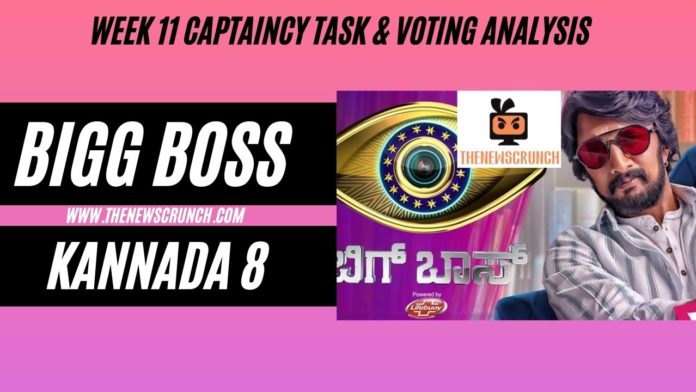 Bigg Boss Kannada 8 enters a very decisive period in the competition as nominations for the 11th-week eviction took place earlier this week. The quest for captaincy takes precedence as the season witnesses a thrilling period after a long time. Five contestants are nominated for eviction this and this captaincy could be a game saver for the winner.

The captaincy task witnessed several twists and turns and the need for coverage is highlighted this week. The contestants need to count on their performances as well as the support from the audience. In what promises to be a competitive week, the contestants will fight out in this task to prove their hunger to survive.

The eviction nomination process was an ad-hoc process this week. On account of performance, Priyanka seems to be lost and dejected. In a highly competitive week with potential finalists, the wildcard entry is giving up too soon.

The other nominations from this week stood out as expected. Prashanth deserves a special mention for performing his part in the task well. Divya Suresh’s screw-up and eventual punishment cost her a chunk of her vote share. However, she will be safe this week.

The limelight shifts back on Manju who won the task with a huge margin. Shubha Pooja was safe this week but did well in the quiz task. It is good to see the contestants fighting hard to win and make their presence felt. This competitiveness was lacking before.

Prashanth was the top performer of this week as of today. However, Aravind and Divya Suresh will be safe. There will be a showdown between Manju and Priyanka. Hence, Priyanka will be the potential eviction for this week in Bigg Boss Kannada 8.