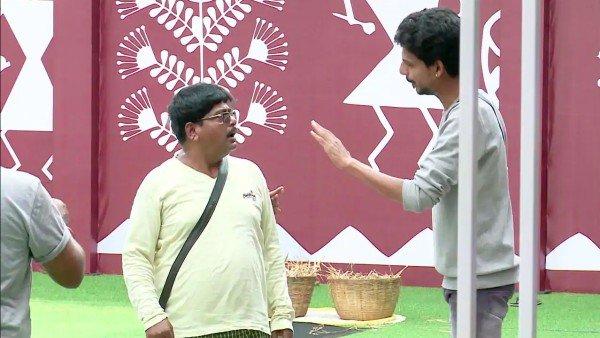 Bigg Boss Kannada 7 entered its week 51st day with a huge tussle between the new captain Raju Tallikote and Chandan Achar. The fight happened during the weekly luxury budget task and Raju was the judge. Raju was furious as Chandan failed to follow the rules of the task laid down by Bigg Boss. Chandan did not like this and fought back. He made accusations about Raju’s unfair captaincy and felt that he was being targeted. This resulted in a huge war or words.

Chandan vs Raju Fight – Who Was Right or Wrong?

As the fight went beyond control, the housemates but a stop to the task and intervened to calm Chandan down. Kuri Prathap and Harish took Raju Tallikote’s side and began fighting against Chandan for confronting the captain of the house.

As the atmosphere cooled down in the house, wildcard entry Raksha Somashekhar gave her piece of mind to Chandan and asked him to focus on the task and not take things personally. Raju was consoled by the rest of the house.

After the first round of the task, Priyanka discusses with the rest of the house about Chandan’s behavior and she loses hope about the prospects of the next round with Chandan in action. Bhoomi Shetty attempts to grab the limelight with this issue and advises Chandan. Chaitra intervenes and claims Bhoomi and others are targeting Chandan. Chandan is definitely having a tough time after his return and so is Chaitra Kottoor.

Chandan is like Rahul Sipligunj of Bigg Boss Telugu 3. Chandan is nominated for eliminations for seven consecutive weeks for her aggressiveness.

It will be interesting to see if the house will spring back to normalcy and if the task will proceed in an amicable manner. A lot rests in the hands of the Bigg Boss Kannada 7’s luxury budget task this week as the losing side will be nominated for eliminations this week.