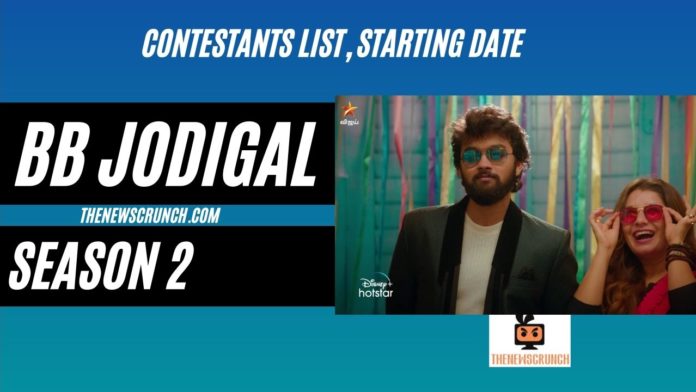 Bigg Boss Tamil contestants possess a huge impact and draw attention from the audience. ‘BB Jodigal’ is expected to fill the void left by the blockbuster reality show, Cook With Comali 2. However, the dance-themed reality show will target the dance lovers as well.

‘BB Jodigal’ will feature amazing dance battles with a touch of comedy and fun. The promo looked promising which went viral on social media. Some of the best contestants from Bigg Boss Tamil will draw the limelight in this exciting new concept from Star Vijay.

Bigg Boss Tamil Season 5 winner Raju and runner-up Priyanka will be the hosts of BB Jodigal Season 2. A majority of the contestants’ pairs feature the stars from Bigg Boss Tamil Season 5. Among the eight pairs of contestants, Amir and Pavni are tough contestants as Amir is a renowned choreographer. The glitzy grand premiere on the 8th of May will feature sensational introductory performances from the ‘jodis’.

The exciting first episode will feature some moments of fun and light-hearted moments. The gimmicks of Raju and Priyanka will be a treat to watch. However, the real impact of their dance performances will follow.

Popular actors Ramya Krishnan and Nakhul Jaidev will be the judges of the show. BB Jodigal will also feature Sandy Master in an all-new avatar.

BB Jodigal will feature an elimination every week. The contestant pairs with the least scores for their performances will be evicted once a week. The final four pairs will enter the Grand finale of BB Jodigal and fight for the title winner position. However, there will be a lot of suspense and following around the elimination updates every week.