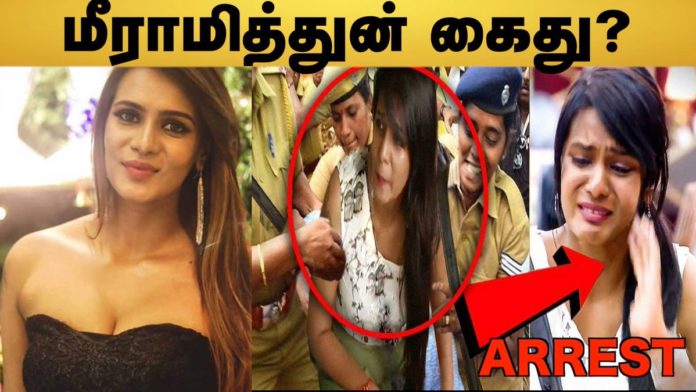 Actress Meera Mithun has been arrested in connection with releasing a video slandering people of the Dalit community. She was in Kerala and was arrested by the Central Crime Branch police.

Bigg Boss Meera Mithun, who has been causing controversy by constantly speaking out for self-promotion, has recently shocked the entire Tamil Nadu community by disparagingly about Dalit people. She has been charged under Section 7 by the Federal Criminal Police following a complaint by several organizations, including Viduthalai Siruthi, that she should be arrested under the Prevention Act. She was expected to be arrested soon. She released a video yesterday challenging the police in this regard.

In it, she challenges that many have raised voices against her and they all wanted to arrest her for the past five years, but it has not been successful so far, but no one can ever stop the growth of this Tamil woman, she had spoken in such a way to anger netizens.

Also, there is an outcry in Tamil Nadu that I should be arrested for a simple, trivial matter that I have spoken about. I am just saying the ugly things that are happening in Tamil cinema. I am speaking to cleanse this Tamil film industry, but false and untrue information has been spread against me for the last five years. Because I’m a successful entrepreneur and an achiever, the conspiracy that continues to bring me down, those who say I should be arrested for what I have said, will talk about the fact that the police have not yet taken any action on the complaints I have made against many over the last five years? As furiously questioned.

She said you have been trying for the last 5 years but have not been arrested. The police have arrested him. He was arrested while staying at a hotel in Kerala. She was summoned by the Central Criminal Investigation Department last week to appear for questioning but has since absconded. She has now been arrested in Kerala; the police department has obtained a transit warrant from the state police and will be brought to Chennai tonight or tomorrow morning for interrogation.

Here is the video of Meera Mithun’s outcry before arrest: