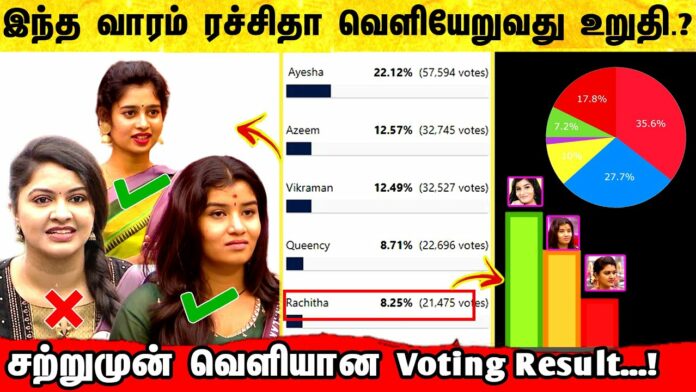 Bigg Boss Tamil Season 6 finished its second week and entered the third week, and the contestants in the Bigg Boss Tamil home are appealing to the viewers with their spellbinding performance. The BB Tamil host Kamal Haasan is blown away by their talent.

Azeem, Ram Ramasamy, Dhanalakshmi, Rachitha, Shanthi, Queency, Vikraman, Maheshwari, Ayesha, Niwashini, Shivin Ganesh, and Sherina are the contestants who are in contention for the second-week elimination.

Vikraman and Rachitha have topped Bigg Boss Tamil 6 voting polls by accruing the highest percentage, and it is certain Kamal Haasan will save them today. Ayesha, Nivashini, Dhanalakshmi, and Ram Ramasamy have amassed enough votes to excel. Bigg Boss Tamil 6 is nearing its conclusion, and the host is reviewing contestants’ performances.