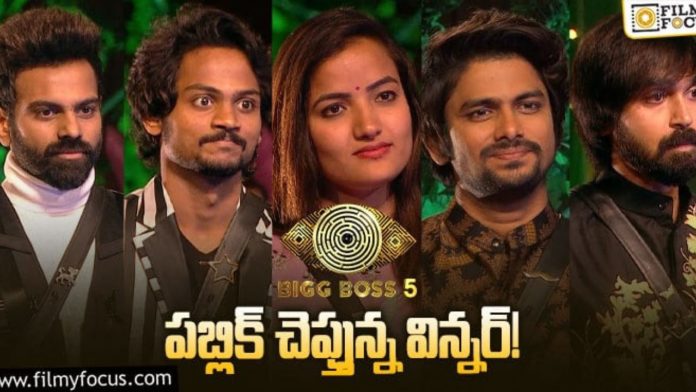 Bigg Boss Telugu Season 5, the world’s biggest television reality show hosted by Akkineni Nagarjuna, has reached a crucial stage. The season will end in three more days. This is the last week. It remains to be seen who the hero of this season will be. For the previous three days, everyone’s focused on Big Boss. There is a hot debate about the percentage of votes on social media platforms. Only one of the 19 contestants for the title will receive the title along with 50 lakh prize money and a plot.

This is the season that started with a total of 19 people. In 14 weeks, 14 people were eliminated. Except for Jaswant Padala, alias Jesse, all the others had to walk out of the Bigg Boss House due to low turnout. Elimination started with YouTuber Sarayu ended with RJ Kajal. Sarayu, Umadevi, Lahari Shari, Nataraj Master, Hamida Khatoon, Shweta Verma, Priya, Lobo, Vishwa were eliminated. Jesse had to leave the Big Boss House for health reasons. Anee Master then faced elimination.

Unexpectedly, anchor Ravi considered a tough competitor, also had to leave the house. However, his fellow contestant VJ Sunny had an eviction pass when the elimination of anchor Ravi was of no use. VJ Sunny did not prevent the elimination. Sunny used the eviction pass for Kajal in the already safe zone. Thinking logically there. If this pass had been scripted for Ravi the story would have been different. After Ravi- Priyanka Singh alias Pinky eliminated. The process ended with Kajal last week.

RJ Kajal was eliminated the week before the grand finale. Her performance went unimpressed. Even in the tasks, she was unable to adapt to her level. Went home. Netizens and viewers are not even sure it is great to continue these days. Due to poor performance, Due to poor performance, Kajal dropped out of the Bigg Boss title contestant race. After her elimination- Sriramchandra, VJ Sunny, Siri Hanmantu, Shanmukh Jashwant.Manas Nagulapalli got a place in the top five at the end.

Siri Hanmantu may be the first of these five to be eliminated. The female contestant who qualified for the Telugu Bigg Boss Season 5 final got the lowest votes. We received the lowest percentage of votes compared to the other four. Are on this list. Before her were Vijay Sunny, Shanmukh Jashwant, Sriramchandra, Manas Nagulapalli. Siri Hanmantu and Manas Nagulapalli may not even be in the top-3 if the current vote trending continues like this. These votes give further impetus to the campaign that male contestants will be in the top-3 as expected.

VJ Sunny is dusting off in this week’s voting. It continues to the top. He received 15,337 votes. This number is unlikely to increase further. Sunny received 53.69 per cent of the total votes cast. Shanmukh Jashwant finished second. He received 8,204 votes with 28.72 per cent. Siri Hanmanthu polled 3,183 votes with 11.14 per cent. Manas Nagulapalli got only 1,186 votes. Percentage of votes 4.15. Siri Hanmantu finished last. 2.29 per cent of the votes were cast. This number is only 655. More votes will be polled for these five as there is still time.