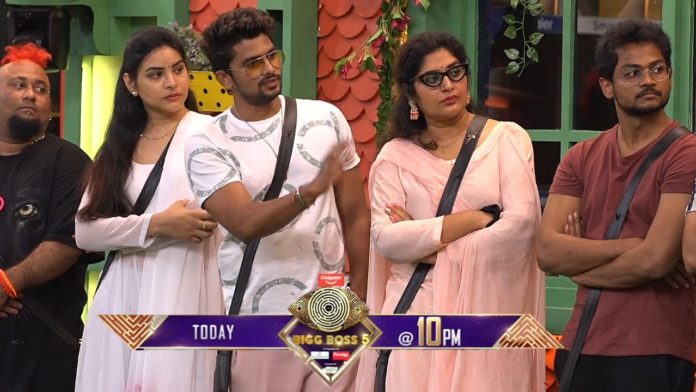 How are the contestants playing at Bigg Boss house? It’s’ hard to imagine what kind of strategies are being played. But this time, new allegations are also coming. The claims made by some of the contestants who came out are making everyone think. They came to talk to Siri Shan outside. That is why Sarayu accused them of playing together like that. And then some in the house told me about the anchor Ravi Lobo relationship. The contestants said that they would meet again even if they nominated each other, that the two were the same, that Ravi would be angry with Lobo for anything.

But it makes sense if you look at the recently released promo that those things are true. Lobo spilled in the nomination for the fourth week. He exposed the original look. However, the reason given by Lobo seemed silly again. He is making nominations for the worst reasons. Not named Lobo, but this time not all of the contestants were nominated for the right reasons.

The reasons given by Lobo are very safe even in the tasks assigned by Nagarjuna. In the fourth week of the nomination, Lobo seems to have targeted Priya with something in mind. Lobo tells his past in the task given by Big Boss to tell first love things as Priya commented on it. Lobo did not like Priya saying that it was like a movie story.

Lobo was reminded of the same thing in the nomination. He was angry with Priya. It is not good to burn like that, Priya warned. He yelled like that and went over and over. And finally, Lobo cried again. Ravi came and consoled. Priya chuckled as Lobo kept one in mind and the other spoke out.

Finally, eight contestants are nominated for fourth-week elimination. As per our sources, the nominated contestants in the fourth week include Ravi, Kajal, Siri, Lobo, VJ Sunny, Priya, Anee Master, and Natraj Master.