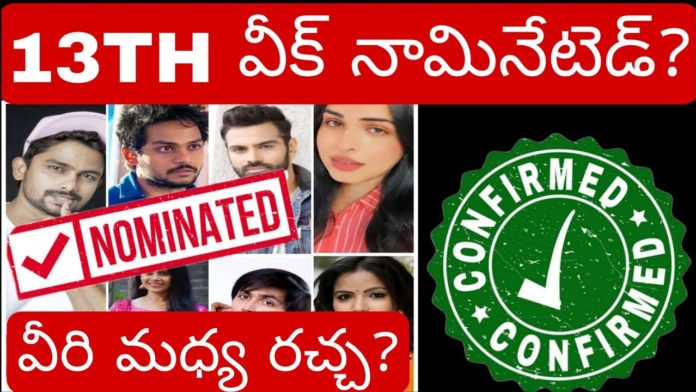 Telugu reality show Bigg Boss Season 5 has completed 12 weeks. Week 12 Anchor Ravi was eliminated from the house unexpectedly. Being eliminated was not only a shock for his fans but also seemed shocking to the viewers. Ravi’s fans also made a big fuss in front of Bigg Boss House. If all this is happening on the one hand Bigg Boss is ready for next week. The elimination process for the 13th week has begun. Of the 19 contestants, 12 were eliminated. There are 7 left.

Among them is Shannu, the last captain of the House, who has no problem with elimination. With this, he is sure to go to the finale. And who will be eliminated last week is a topic of interest to everyone. Week 13 It is up to the contestants to decide who will be eliminated as part of the nomination process. That’s why Big Boss set a task. Balls were given to members of the household. Among them are the faces of the members of the household. Bigg boss opened the main door. Anyone who wants to be eliminated will have to kick the ball out of their face. A promo related to this has been released.

In this task, once again, a war of words took place between Sri Ramachandra and Sunny. The reason for that is that once again Sunny nominated Sri Ramachandra. Sriramchandra asked why he was nominated and why the rest were not nominated. He said that I would nominate those who have a connection to it. Sriram Chandra said that I will do it myself. Sunny replied that I would do the same if it was wrong. Sri Ramachandra says that once you do what a friend wants you to do, you will feel correct. If so how many weeks will I be able to nominate myself? Sriramchandra asked Sunny.

Serious warning was given by Bigg Boss that if they do not make nominations, they will be nominated directly. The 13th promo in the recent promo announces the drama in Eliminations. Finally it was shown that ecept captain Shanmukh all the contestants are nominated in the 13th week.