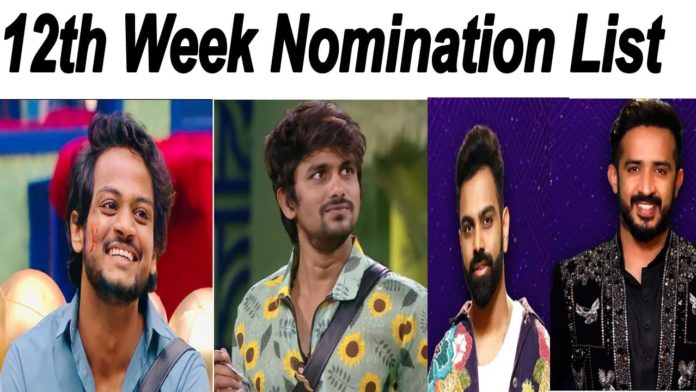 And the fifth season, which is now underway, is getting a similar response. With this, it is also being successfully demonstrated. Nominations are one of the essential processes in this show. Nomination details for week 12 have been leaked. And let’s find out who’s nominated this week!

The previous four seasons in Telugu have been super duper hits. With this came speculations on a fifth season. The audience response to this, which started a few days ago in this context, is good. However, even if one week is a success, each week is going smoothly. All in all, it continues to entertain the audience.

Nineteen contestants entered the fifth season. Of these, Saryu was eliminated in the first week, Umadevi in ​​the second week, Lahari in the third week, Nataraj in the fourth week, Hamida in the fifth week, Shweta in the sixth week, Priya in the seventh week, Lobo in the eighth week, Vishwas in the ninth week and Anne in the eleventh week. Jesse was out in ten weeks ill.

The task of ‘eviction free pass’ was done last week. VJ Sunny was the winner in this task which went very juicy. Thereby owning the pass. Bigg Boss said that he could use it for himself or give it to another contestant. Thus he received the opportunity to escape elimination for a week.

The Bigg Boss show has many tasks. However, the nomination process is more important than anything else. It airs every Monday, the first day of the week. Conflicts between the contestants appear at the same time that this is happening. It also stretches as if it will hit at one point. With this, the audience waits for today.

Details of the nomination process for the 12th week have come out recently. According to this .. all the contestants have to stand in the garden area. Drishti dolls were placed in front of them. Also, put the pots aside. It was learned that the two effigies that each contestant wanted to nominate would have to be put in pots and smashed.

The whole nomination process for the 12th week seems to be going on with clashes between the contestants as in the past. Most importantly, the war of words between Priyanka, Siri, Kajal and Ravi. Except for Captain Manas, Kajal, Siri, Ravi, Shanmukh, Vijay Sunny, Priyanka Singh, and Srirama Chandra have been nominated this week.

For the 12th week, it became interesting that all the contestants except the captain came into the nominations. Most importantly, they are the ones who are considered the title favourites. With this, those who are heavy following will escape. Only the contestant with fewer fans is in danger of losing. With this, there will be an exciting elimination this week as well.