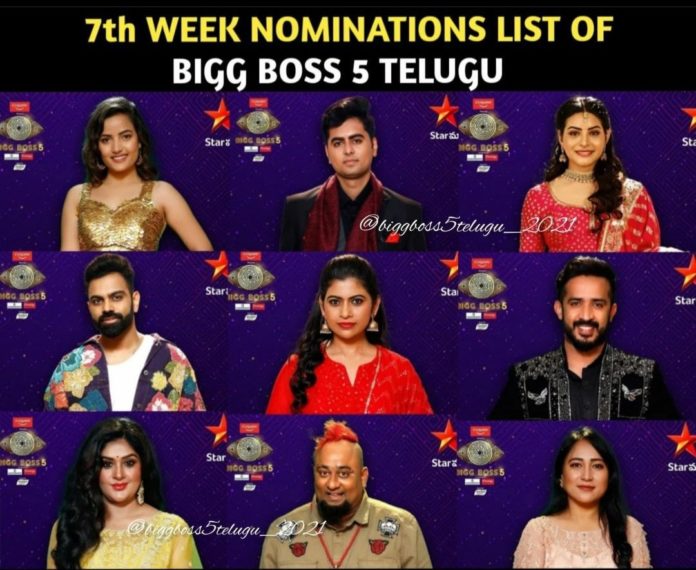 Bigg Boss is emerging as the number one show in Telugu, gaining unprecedented popularity in the past. It is for this reason that it has already completed four seasons. The fifth in this series also started last month. It’s also been exciting from the beginning.

However, most of the contestants are in the nominations every week. With this, the process is going on very interestingly. The list of nominations for the seventh week in a row has already been leaked. Let’s find out who is nominated!

Amidst many speculations, the Bigg Boss managers started the fifth season last month with a bang. Of these, 19 contestants entered as never before. Also, at the beginning of the season, it got a massive rating for spreading fun in various ways like riots, whores, romance. So the season is bringing excitement day by day.

A total of 19 contestants entered the fifth season. This created the situation where more people had to be in the nominations every week. Against this backdrop, Sarayu Roy was eliminated in the first week, senior actress Umadevi in ​​the second week, Lahari Shari in the third week, Nataraj Master in the fourth week, Hamida in the fifth, and Shweta Verma in the sixth week.

It seems that the nominations task for the seventh week is going to be the newest. For this, a vast set was laid in the garden area. The house has bananas. Information that those who take it first will have special authority. It is learned that the situation of nominating someone directly irrespective of this task has also come up.

It is learned that Lobo was sent to a secret room during an episode on Saturday. At that time, the host Akkineni Nagarjuna said that you had been nominated directly for next week. He went into the elimination zone regardless of the nominations task this week. However, the housemates are not aware of this.

It seems that the nominations process for the seventh week is already over. It is believed that nine members were nominated. It includes RJ Kajal, Siri Hanmant, Annie Master, Priya, Anchor Ravi, Priyanka Singh, Srirama Chandra, Jaswant Padala, and the directly nominated Lobo.

According to the information received so far, Shanmukh Jaswant, Sunny, and Manas escaped this week. Being captain does not result in cosmic nominations. The rest of them were nominated. Voting in the seventh week will be interesting as it will have title favorites like Ravi, Priya, Shriram, Siri, and Kajal. And we have to see who goes in this.