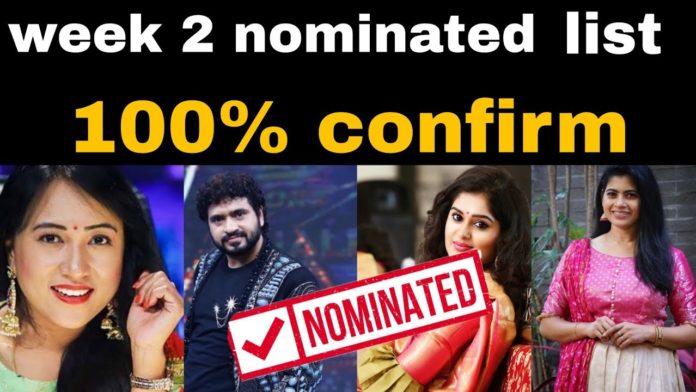 The second week of Bigg Boss is going to be hectic. Already the first elimination has taken place in the Bigg Boss house. Sarayu came out of the house due to fewer votes. The nomination process for the second week will start on Monday’s episode. But the nomination list has been leaked. The channel also shared a promo related to the nomination process. It looks like Shweta Verma has given it to everyone. Shweta Varma counters badly for Lobo, Kajal, and Hamida. All in all, Shweta Varma is running out of the house due to her temper.

Eevery one seems to have left words beyond boundaries. Karthikadeepam Uma sounds like something she shouldn’t have said, and Shanmukh is shocked at once. All in all, today’s episode looks like it’s going to be a good one. Each contestant seems to be on fire. However, the list of nominees for the second week in a row is circulating on social media.

And how will anyone behave in this second week? Want to see what kind of image comes to whom?. Except for RJ Kajal in the first week, no one else was nominated consecutively this week. It seems that RJ Kajal will be in the nomination every week.

Voting through Hotstar:
Bigg Boss Telugu season 5 voting process on Hotstar involves logging into the app through email/Facebook. The viewers are required to search for the Bigg Boss Telugu season 5 episode of a particular day and click on the vote option that can be seen below the episode video. Among the nine contestants nominated for elimination this week, you can vote for your favorite contestant(s) and cast your vote. Every user will be given 10 votes per day, either cast for one contestant or split among multiple contestants.