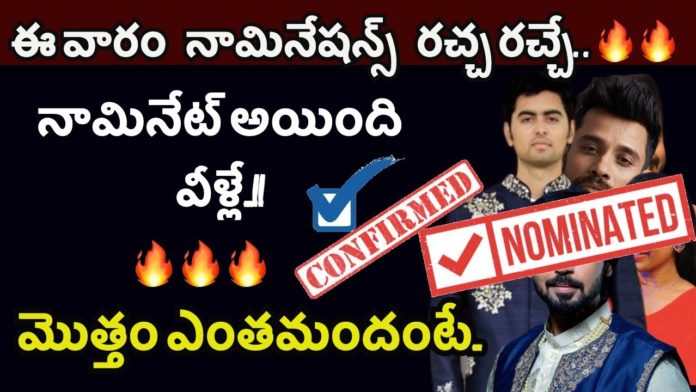 The nomination process for the 9th week of Elimination on Bigg Boss Telugu 5 reality show has been completed. The nomination process was unprecedented in the history of Bigg Boss Telugu. As usual, there was a commotion among the members of the House. The members of the household exchanged verbal abuse with each other. Week 9 When it comes to who gets nominated.

Host Nagarjuna started the elimination process while entertaining the family members with game songs as part of the Diwali celebrations. The Entertainer of the House Lobo was eliminated from the eighth week home. Lobo left the Big Boss house amidst the emotions of the members of the House.

Speaking to Sri Ramachandra during the nomination process, Manas said, “Every week someone leaves home. So even if you leave the house, it will not be funny .. Sriramchandra responded that there would be no funk in the House even if you are.

There was a heated argument between Siri Hanmantu and VJ Sunny. Anyone anywhere can think during games that take place at home. But pointing out the health thing is very sad for me. There have been a lot of bad vibes coming out of you saying such things. That is why I am nominating Siri Hanmantu.

Singer Sriramchandra and anchor Ravi clashed with Manas. The controversy escalated further as Sunny moved away in the middle for Manas. Sri Ramachandra means who you are to support the mind .. my friend. Vijay Sunny replied that he was your son-in-law.

Anne Master, Jaswant Padala, RJ Kajal, Vishwa, Manas, Priyanka, Anchor Ravi, Siri Hanmantu, Sriramchandra, VJ Sunny have been nominated in the 9th week of Bigg Boss Telugu. Shanmukh Jaswant is safe from nomination as captain. Let’s take a look at how many people will be voting for whom in the coming days.