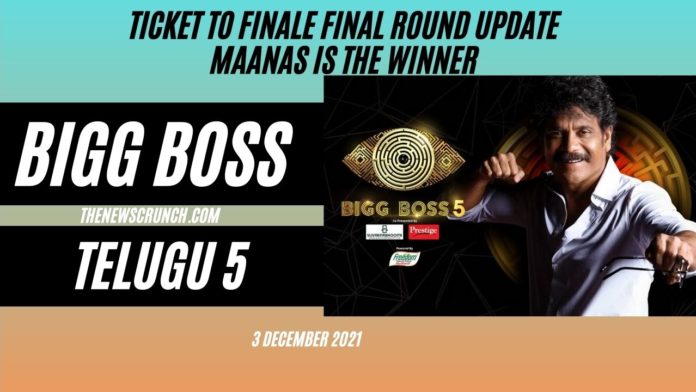 Bigg Boss 5 Telugu is a few weeks after crowning the deserving Bigg Boss Telugu Season 5 title winner. The ‘ticket to finale’ tasks is a real test for the contestants in the quest to become the first finalist of Bigg Boss 5 Telugu. At the midst of the final round, Maanas held his lead at the top of the table. The audience is excited to see the first finalist of the controversial reality show.

The first task in the Bigg Boss 5 Telugu ticket to finale involves a test of endurance. The contestants need to stand in a vessel filled with ice and protect their basket filled with balls. If they step out of the ice vessel, the other contestants can remove their balls. A massive fight erupts as usual and Sunny was in the limelight of the same.

Priyanka, Siri and Kajal need to get competitive as they are in danger of elimination this week. However, Maanas is the deserving winner of the first ticket to finale task.

Maanas held the lead after the first two task in the ticket to finale challenge. However, one final round task is pending to test the Bigg Boss 5 Telugu contestants. However, the first finalist will get a chance to save him/her from the crucial nominations for eviction this week.

The grand finale of Bigg Boss 5 Telugu will be held on the 19th of December 2021.