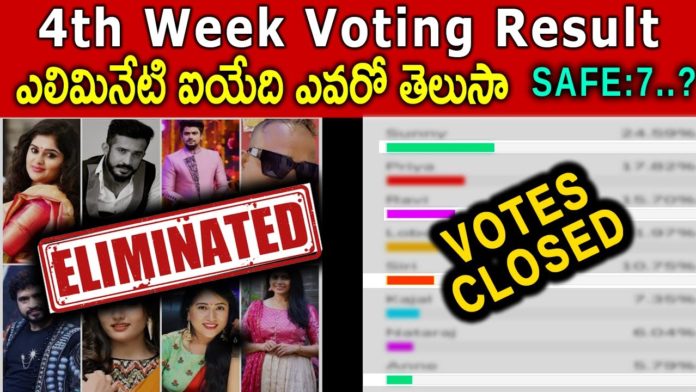 The fifth season of Bigg Boss Telugu started with 19 contestants. Tollywood King Akkineni Nagarjuna launched the show on September 5. On the show’s first day, Bigg Boss got off to a successful start with an 18 TRP rating. However, due to a large number of housemates, the nomination counts are changing every week. In the second week, six were nominated, and Sarayu was eliminated due to low votes. Then in the third week, only five came in for the nomination. Of these, Lahari was eliminated. So far, only three women have been eliminated from the house. With this, there is a general interest in who will be eliminated this week.

Eight people were nominated this week. Lobo, RJ Kajal, Siri Hanmant, Anee Master, Priya, Anchor Ravi, Nataraj Master, VJ Sunny are in the nomination. However, in unofficial polls, Vijay Sunny was ranked number one with the most votes. Later, it seems that Priya is also getting good support from the audience. Anchor Ravi was limited to third place. The following places are Siri Hanmanth and RJ Kajal. The rest are Lobo, Nataraj‌ Master‌, Yani Master‌.

Lobo, who was in the Danger Zone until yesterday, was informed that the votes had gone up sharply after the Captaincy Contender task. With this, he also has plenty of chances to be safe. One of the remaining Anee and Nataraj Master are facing elimination. It seems that those who have less following on social media got fewer votes than everyone else. However, netizens believe that since only females have been sent so far, it may send a male contestant this time. Overall it looks like a choreographer is leaving Big Boss this week.