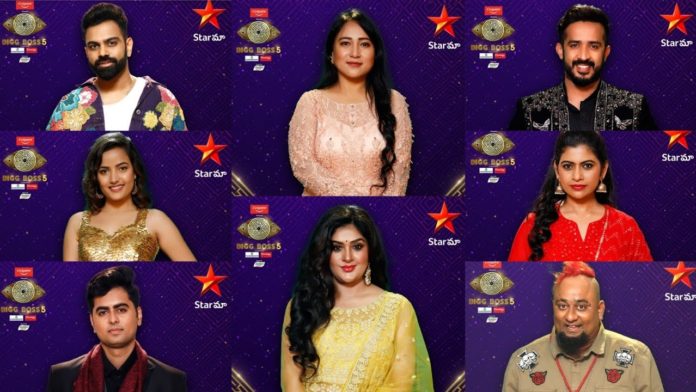 The Telugu reality shows Bigg Boss has a lot of viewers in the two states. It has already completed four seasons. They were currently running their fifth season‌‌ successfully. NTR hosted the first season of Bigg Boss, and Nani hosted the second season. Three of the four seasons were sponsored by Akkineni Nagarjuna. Nagarjuna is also hosting this fifth season. Each time 16 members of the household came, but this time they brought three more. This time the house was filled with 19 members. So far, six have been eliminated. The first-week Sarayu, Second-week Umadevi, Third-week Lahari, Fourth week Nataraj Master was destroyed, Hamida was eliminated in the fifth week, and Shweta Verma was eliminated in the sixth week. With this, there are currently only 13 contestants in the house.

Six weeks had just passed in the house. As part of this, five girls and a boy were eliminated. However, who will be eliminated this week is raising suspense. It seems that those in the nomination, especially Master Anee, Lobo and Priya, are in the danger zone.

However, according to the latest information, it seems that Lobo got more votes. With this, it seems that Priya and Ani Masters are in the danger zone this week. Of the two, however, Anee master is expected to be eliminated. Official information on this is yet to be known.

In a recent episode, the contestants spoke about the obstacles in their lives. Sunny said that he had faced many insults and that raising three boys would have been challenging for her mother. Shanmukh said, ‘I got a seat in Bangalore after Inter-Secondary, but at the same time, I felt very much that my half-life was gone due to love breakup. He explained that at one stage, he even thought of committing suicide.

If so, some netizens say the Bigg Boss show will not be as impressive this time around. Talk that there is no significant heat in the house. Everything is running smoothly. Tasks are also the same as in the last season. Many say they are repeated. There have been no wild card entries till now.