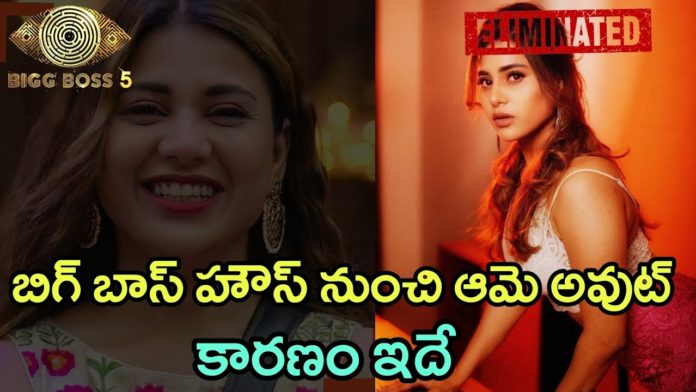 Bigg Boss Season 5 has reached its climax. The game started with 19 contestants, and by the time it got its 40th episode, there were only 14 members in the house. Sarayu in the first week, Umadevi in ​​the second week, Lahari in the third week, Nataraj Master in the fourth week, and Hamida in the fifth week lined up at home. Ten candidates were nominated for the Sixth Eliminations. There are ten nominations: There are ten nominations: Sriram Chandra, Siri, Lobo, Vishwa, Shanmukh Jaswant, Priyanka, Anchor Ravi, Jesse, Shweta, Sunny this week.

However, in terms of performance and popularity Shanmukh Jaswant, anchor Ravi, Sunny has no chance of being eliminated. Anchor Ravi is damaging his image and losing his dignity. He is putting total effort into tasks. He is not relaxed about whether he will get votes or not. He stays on the solid contestant list focusing on how to play the game. How to win. The votes for Shanmukh Jaswant are falling in heaps. There is nothing negative about Manodi if he misses any of that Siri nostalgia. Shanmukh is currently getting more votes than anyone else in the nominations. His fan following is something like that.

Now Sunny is getting even more vital. Although he is working hard for a berth in the top 5 by generating fun, he increases his graph. The rest of Sriram Chandra, Siri, Priyanka these three seem to be in the safe zone. With Hamida gone, Sriram focused on the game. He is getting good votes due to his clean image. Although there are no positive opinions on Siri. Dosti with Shanmukh gets along well with her. And so is Jesse’s situation. Jesse is slowly getting stronger like water under the mat.

As for Priyanka, she fell into a trance and left the game in the air. Bigg Boss has been criticized for pretending to come to the house just for the sake of it. However, she is getting sympathy votes well. Manas, who is a strong contestant, is not in the nominations this week. His votes are going to be half Sunny and half Priyanka. As Priya is also not in the nominations, her votes are also going to Priyanka.

The remaining three Shweta, Lobo, Vishwa, are the third of the three this week. But who has a chance of being eliminated. Vishwa became the captain this week, so it is almost saved. There were no instances where the man who was the captain of the house was eliminated. When it comes to Lobo, Lobo is a believer in anchor Ravi. Lobo is playing the game as if it is not for Ravi but himself. By this calculation, most of Ravi’s fans did not have a chance to save Lobo.

Moreover, the percentage of Telangana votes for Lobo is very high. Maany people like him very much. That is why he is being saved.

The rest is white. She has no big craze. Her graph did not grow even after coming to Bigg Boss. Shweta is still in the Bigg Boss House by not getting into the nominations, but otherwise, she will have to be eliminated someday. Because Hamida, Nataraj, Umadevi, Lahari, and Sarayu, who provided better performing content than her, were destroyed. Shweta, however, escaped the nominations last week. Suppose you look at the last five eliminations. Whoever caused a commotion in the house is coming to be eliminated.

Putting Hamida aside, Umadevi, Nataraj Master, Sarayu, and Lahari were in a hurry while there were nominations. They were given more screen space and stretched. This week too, Shweta got more screen space. In that sense, it is safe to say that Shweta will be eliminated this week. The situation would have been different if Vishwa had not been the captain. His graph increased as he became the captain. Shweta’s graph fell. Overall this week’s elimination will be hard to whitewash from the husband. But who should be kept, who should be sent because Bigg Boss likes it. Shweta is likely to be saved only if they put aside the voting and bring in any new calculations, Elimination is set.!