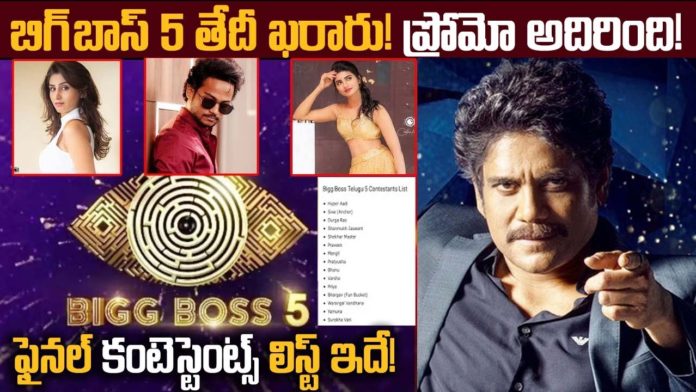 Everyone knows about the popularity of the Bigg Boss show. Hence it’s now produced in all popular regional languages. Season 5 of Bigg Boss Telugu is about to start. Rumors about the Bigg Boss show keep coming. Regardless of the show, there is always something news being shared about it. However, now details about the season 5 contestants seem to crop up every day.

The Big Boss promo shows the eye logo turning gold and then forming a puzzle-like maze inside the eye. This means it’s about to be the most delusional time of the year, as well. She says Big Boss is coming to provide entertainment soon. According to the information received, the Bigg Boss show will come in the first week of September. But this has not yet been clarified.

There were rumors that Rana will be replacing Nagarjuna as a host for season 5. But according to the information from trusted sources, Nagarjuna is coming back as the host. Some more information about the contestants has leaked. This time there will be more female contestants than men. Apart from that, it seems that most of the contestants will be from social media and television stars.

Anchor Ravi, Navya Swamy, Siri Hanmant have been confirmed. Shanmukh Jashwant is confirmed as a contestant. However, it seems that Varshini Sounderrajan has given her consent for the upcoming season. Varshini disappeared on the Comedy Stars show yesterday, and Srimukhi has replaced her. Looking at the comments made by Srimukhi on the first day, it is clear that Varshini will never be seen in the show again.

With Varshini going to the Bigg Boss show, she had to say goodbye to the Comedy Stars show. Netizens have proposed that Varshini will be in Bigg Boss as she will not be anchoring Comedy Stars anymore.

However, Varshini also got movie offers. The offer came in Samantha Shakuntalam and Sumant movies. And what if Varshini comes to the Bigg Boss show? Is there a connection between this theory of not appearing in the original Comedy Stars show and coming into the Bigg Boss show? All such questions will be answered soon.