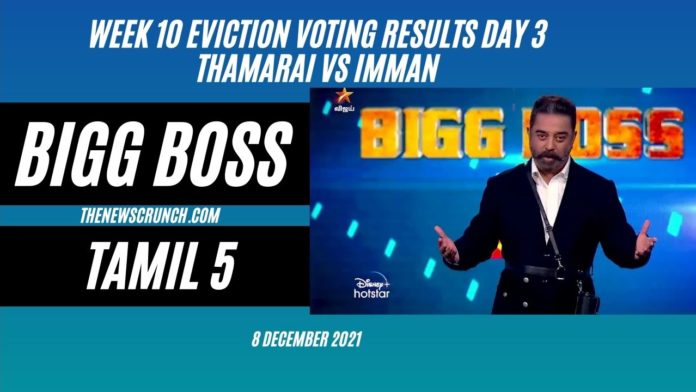 Bigg Boss 5 Tamil continues through the tenth week as the temperature rises inside the house. The tenth-week political task in Bigg Boss 5 Tamil performances will impact voting. The nominations list for Bigg Boss 5 Tamil week 10 elimination features seven contestants. The voting lines are open from Monday night until the end of Friday’s episode.

Priyanka is locking horns with Thamarai and Raju this week. Niroop is safe with his captaincy but the performances in the last two weeks will impact voting results. Iykki was the last eviction in Bigg Boss 5 Tamil. However, the eliminations in the last four weeks are female contestants. Hence, the limelight now falls on the week 10 elimination voting results which feature a massive fight between Abhinay and Thamarai.

The voting results prove Ciby’s support this week but the competition in Bigg Boss 5 Tamil toughens. There are multiple chances of Abhinay or Thamarai’s elimination this week. However, Akshara and Pavni are facing the heat as the competition surges. Imman is also becoming a tough contender after getting thoughtful negative comments from Kamal Hassan this week.