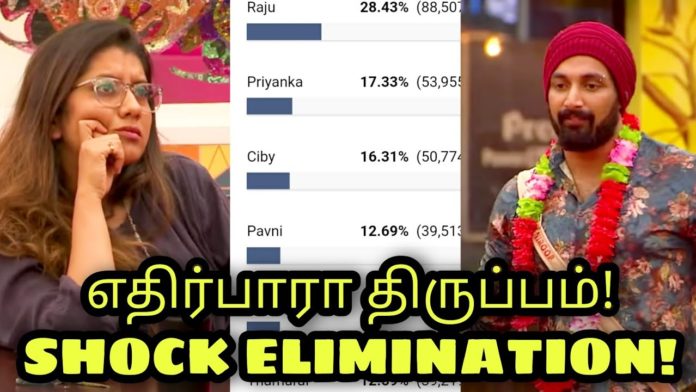 Now, Kamal Haasan’s top-rated reality television, notably Bigg Boss 5 Tamil, has five finalists. Since Thamarai Selvi’s departure at the fourteenth week, the house now has contestants including Pavni Reddy, Amir, Niroop Nandakumar, Priyanka Deshpande, and Raju Jeyamohan, who will directly compete for the title. The winner for the upcoming finale will be chosen based on the public’s voting.

The show’s first promo will take place on Monday (January 10), and each of the five contestants will speak to the spectators soon. The contest should persuade the audience to vote for them, shedding light on their respective journeys in the home and why they need to be the contest winner. Before the episode, the show’s voting trend is noticeable on social media. The first finalist of the season, Amir, has received the least votes on one of the first days of the season finale.

Niroop enters the top 4 while Pavni occupies the third spot. Raju Jeyamohan is in the lead with the highest votes, followed by Priyanka Deshpande, who ranks second. The current trend shows that their vote count difference is minor, allowing for the possibility of the outcome changing at any moment. Good, therefore, keep voting for your favorite contestant to see them raise the Bigg Boss Trophy 5 Tamil prize at the finale.