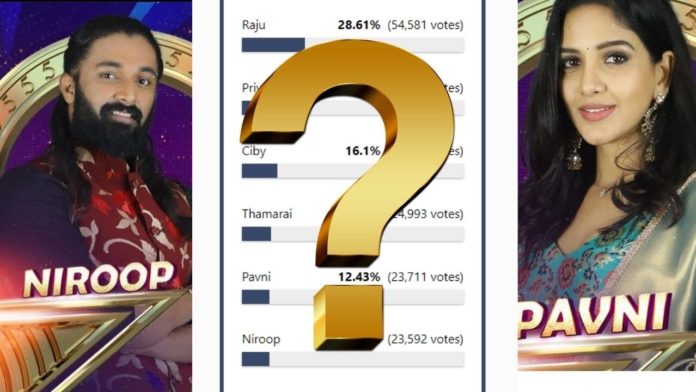 It’s been a memorable week in the Bigg Boss house, with seven contestants left to survive. There will undoubtedly be a dramatic rollercoaster with friendships changed and maybe even hearts broken as we head to the finale.

There will be some surprises in the fifth episode of the show, where we say goodbye to two contestants, and the preview has become a hot topic. The latest promo depicts Sarathkumar carrying a box of money and then walking into the house. As we’ve seen in the video, he has offered each contestant Rs 3 lakh to find out who can resist his offer and walk away.

The house currently has 6/7 contestants left – Amir, Niroop, Ciby, Raju, Priyanka, and Thamarai. Though it’s not known whether one of the housemates will accept the offer on Tuesday, their walking out would lessen the risk for others because only one elimination will be happening in this weekend episode if it happens. Amir was the first finalist to win a free pass in last weekend’s show.

According to the voting trend, Raju Jeyamohan leads the list with the most votes. Pavni, Priyanka, and Thamarai follow him. On the flip side, Niroop and Ciby have received the least votes so far. The duo’s performance and residencies were up to the challenge, but including more well-known contestants may have impacted their vote count this week.

Niroop’s eviction may happen this week. Still, it could also occur anytime depending upon the other circumstances, including Niroop’s decision to accept the offer on Sarathkumar’s part and the count of the votes, which can change over time.