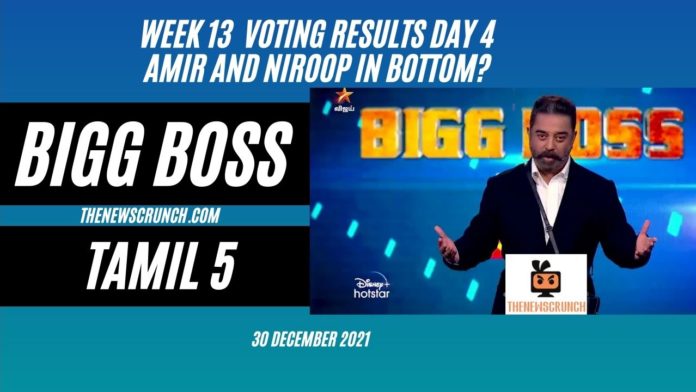 Bigg Boss 5 Tamil progresses through a fiery thirteenth week amidst all the drama, fights and action in the ‘ticket to finale’ tasks. Amir, Ciby and Sanjeev are in contention for becoming the first finalist of Bigg Boss 5 Tamil. Bigg Boss 5 Tamil nominations list for week 13 elimination features eight contestants in a decisive eviction voting results this week.

Bigg Boss 5 Tamil features a decisive week filled with lackluster tasks to decide the first finalist. The competition toughens as the voting results for the 13th week elimination signals danger for Niroop, Amir and Thamarai. This week’s elimination will be crucial for the top 8 contestants of Bigg Boss 5 Tamil.

The voting results prove Raju or Priyanka’s vote base will guide them to victory this week but the competition in Bigg Boss 5 Tamil is tremendous. There are multiple chances of Thamarai or Niroop’s elimination this week. Ciby is also becoming a tough contender after getting thoughtful negative comments from Kamal Hassan this week.