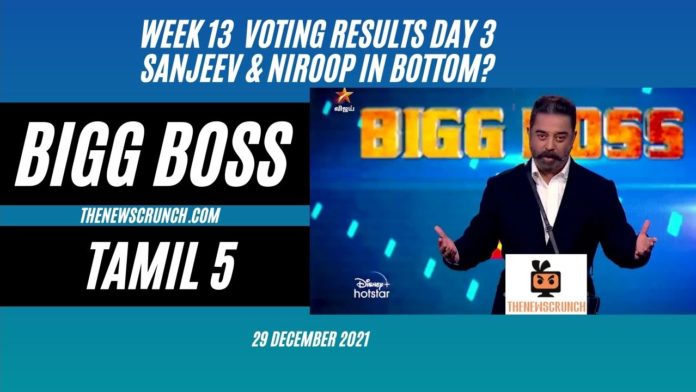 Bigg Boss 5 Tamil vote kickstarts the ‘ticket to finale’ thirteenth week as the fiery ‘ticket to finale’ tasks which causes massive fights in the BB house. The nominations list for 13th week elimination in Bigg Boss 5 Tamil includes all eight contestants. Raju and Priyanka lead the voting results race while Varun and Akshara was evicted last weekend due to least votes.

The host Kamal Hassan’s tips increased the thirst to compete among the contestants this week. The voting results for Bigg Boss 5 Tamil will be impacted by the ticket to finale tasks which will crown the first BB Tamil finalist. This week’s elimination will be crucial for the top 8 contestants of Bigg Boss 5 Tamil. Hence, the focus shifts to the week 13 eviction voting results which signals massive danger for Niroop and Sanjeev.

The voting results prove Priyanka’s vote base this week but the competition in Bigg Boss 5 Tamil is significant. There are multiple chances of Thamarai or Niroop’s elimination this week. Pavni is also becoming a tough contender after getting thoughtful negative comments from Kamal Hassan this week.