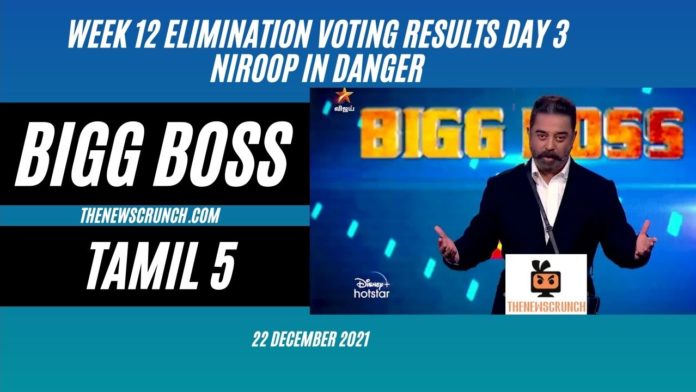 Bigg Boss 5 Tamil vote continues its the twelfth week as the emotional family entry task becomes the highlight of this week. The nominations list for 12th week elimination in Bigg Boss 5 Tamil includes six contestants. Abhinay was evicted last weekend due to least votes. The voting results window will close after Friday’s episode.

Raju’s tough fight during the captaincy task earned accolades. The fight to enter the finale commences as Bigg Boss 5 Tamil has just four more weeks. This week’s elimination will be crucial for the top 10 contestants of Bigg Boss 5 Tamil. Hence, the limelight shifts to the week 12 eviction voting results which signals massive danger for Niroop and Varun.

The voting results prove Ciby’s support this week but the competition in Bigg Boss 5 Tamil is significant. There are multiple chances of Niroop’s elimination this week. Pavni is also becoming a tough contender especially after the fiasco with Abhinay.