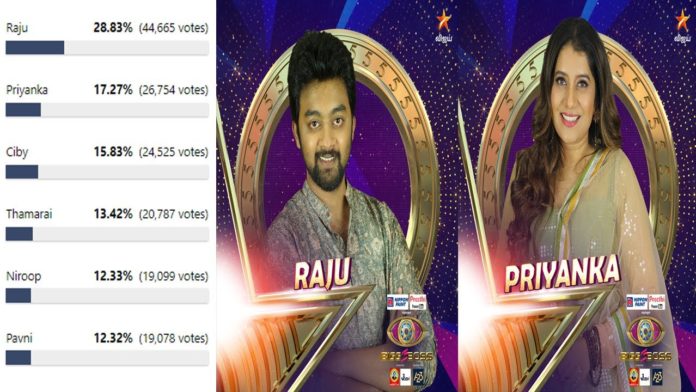 Bigg Boss Tamil 5’s sixth series finale will air on January 16. As the finale of Bigg Boss Tamil 5-series draws near, there is a lot of commotion about the right and wrong guesses for the winner and runner-up of the show’s 6th season. Thamarai was the last contestant to exit the Bigg Boss Tamil 5 House. Yes, She was eliminated last week.

At the same time, as we’ve implied that fans are disappointed with Vijay Tv in Thamarai’s elimination and will miss her vote, our rumors indicate that Thamarai was evicted in place of Pavani. Our team can state Thamarai’s termination will represent a twist in the popularity of Bigg Boss Tamil 5.

Audience members watched on social media platforms among themselves, joking about the pointlessness of voting when creators ignored views and opted to eliminate contestants. Thamarai was in third place, and everyone anticipated she would advance to second place. When she lost, the contestants from the first and second-place positions were Raju and Priyanka. Raju and Priyanka have garnered attention on social media over the last week.