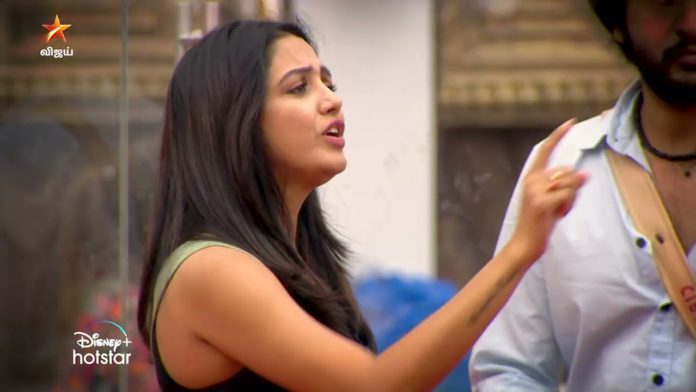 Bigg Boss 5 Tamil is gathering steam as the tasks continue to enthrall the audience. The luxury budget task for this week features the test of tactical skills. The Panchatantra task kept the housemates on their toes as the need to perform is at its peak. Nine contestants are nominated for eliminations in Bigg Boss 5 Tamil this week.

The housemates start feeling odd about the behavior of some contestants. Pavani is at the centre of the gossip drama inside the Bigg Boss house. Pavani is tactically using her allies to talk and gossip about other members in the house. This is not going down well with a section of the audience as well as the housemates.

Pavani openly attacks Abhinay, her good friend in the house. Apparently, Abhinay told Varun that Pavani spoke wrong things about him. Unfortunately, the bond between Abhinay and Pavani might take a beating now. After being a silent little cat in the Bigg Boss 5 Tamil house, Pavani is rising up as a contestant to look out to.

Raju sensed this and spoke to Pavani and asked her to maintain distance with him. Whether this is Pavani’s strategy or game plan, only time will tell. However, the bubbly contestant is revealing her game face and these are still early days in Bigg Boss 5 Tamil. The netizens debated Pavani’s recent outburst against Abhinay. While some condemned her game plan, few others stood by her side.

Other contestant fans called her

Now, when she stood against the manipulators, double gamers

Calling her as "Dangerous"

i think they need 10 more names to tag her… 😁😁 pic.twitter.com/t5aLBCD0Fd

To everyone going off on Pavni for that one line she said in the promo tell me one thing, how many of them have directly gone and discussed about the matter to the person they're having the problem with. I'm not a Pavni fan nor a hater of the other contestants #BiggBossTamil5

Bigg Boss Tamil makers favor the contestants who are content creators. As a result, Pavani is least likely to be eliminated this week. There are high chances of Chinna Ponnu, Isai Vani or Iykki’s elimination this week.