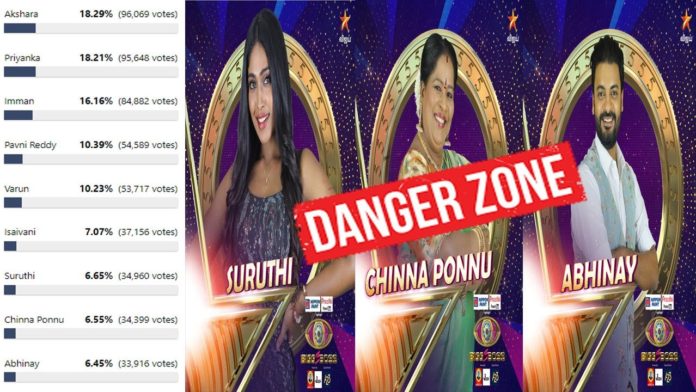 With 80 days to go before the end of Bigg Boss Season 5, there is a lot of talk about who will be the third person to leave the Big Boss house this week.

This week’s elimination list includes Abhinay, Akshara, Pavni, Chinna Ponnu, Iman, Priyanka, Isai Vaani and Varun. It has been widely rumoured on social media that the Chinna Ponnu, who has been escaping Elimination for the past two weeks is leaving this week.

Bigg Boss announced last week that those who win coins in the Panchatantra Task have the power to use that coin to change the head of the house or save anyone on the Elimination. He also said that the coin could only be used when the Big Boss says so. Thus, Abhishek Raja, who left last week, could not be saved using the coin. Isai Vaani, Varun and Pavni, who were nominated this week, have coins‌.

This week, no one took advantage of the opportunity for those who already have coins to use Bigg Boss coins to replace him at Elimination. As soon as Chinna Ponnu’s name appeared on this week’s elimination list, fans were almost sure that she was going to leave. But looking at the series of events that followed, many wondered if the Isai Vaani would leave.

Bigg Boss gave the Isai Vaani, who won the firepower coin in the Panchatantra Task, the power to control the whole of the food and kitchen. But, Isai Vaani did not use it properly. Not only that, but as soon as she got power, there were drastic changes in how she behaved.

With no one talking to her for three weeks and the loneliness that everyone is setting herself aside, Isai has only a few things to do this week as she is the head of the Bigg Boss house even though the kitchen is only under her control. It is said that Isai may be eliminated this week for these reasons. Similarly, some say that Abhinay is likely to be eliminated.

With four weeks to go before the start of this season, Abhinay is doing almost nothing. Fans have commented that Abhinay is just like Ramesh from the previous Bigg Boss season. Due to controversy, Isai Vaani is also expected to be eliminated this week, or it may be Chinna Ponnu due to fewer votes. If someone is supposed to use the power of the coin this week, Elimination may change; we will have to wait for the weekend episode to know who will get evicted.