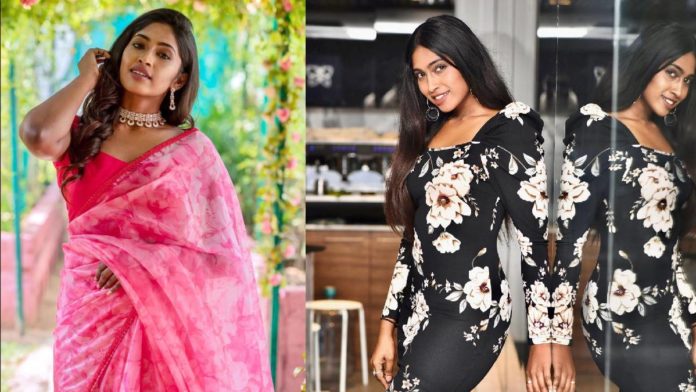 The fifth season of the much-anticipated Bigg Boss show got off to a rousing start on the evening of October 3. They are injecting various changes this season from last season. This season the fans have been allowed to face different people rather than familiar Vijay Tv faces. If there are people friendly to the fans this season, Vijay TV Priyanka, Chinnathambi Pavni Reddy, folk singer Chinna Ponnu, serial actor Rajiv Jayamohan, and Imaan Annachi.

Suruthi Periyasamy is one of the unknown contestants of this season. The model is slowly gaining fans. Born on November 24, 1995, in Salem, she has been modeling. She has suffered many humiliations in the early days due to her black complexion. In such a situation, she spoke about the latest task shown in yesterday’s show, which caught the eyes of many fans. Speaking of which, she said, ” Her Dad is the same age as her grandfather.”

Suruthi Periyasamy’s dad didn’t talk to her until 13 when he passed away. He was never cordial with her. Suruthi felt happy after her father’s death as she and her mom was finally relieved from his clutches, but things got a lot harder after that.


They didn’t have money for food, and Suruthi somehow struggled and studied engineering through sports quota. Later she got a job in a company in Coimbatore. However, she came to Chennai saying that there was no progress in that job. But when she came here she got an appointment for the course she was studying and then she got the opportunity to do modeling. At one show, a model came and asked her to be a model, which she finally accepted, and she did the photoshoot called ‘Dark in Divine.’


We had seen all the Tamil gods as white, so we had to show a little black, so in that calendar photoshoot she had done as Lakshmi Devi, that photo went viral on the internet from which she started interviewing on channels like BBC, which helped her to gain more modeling roles.