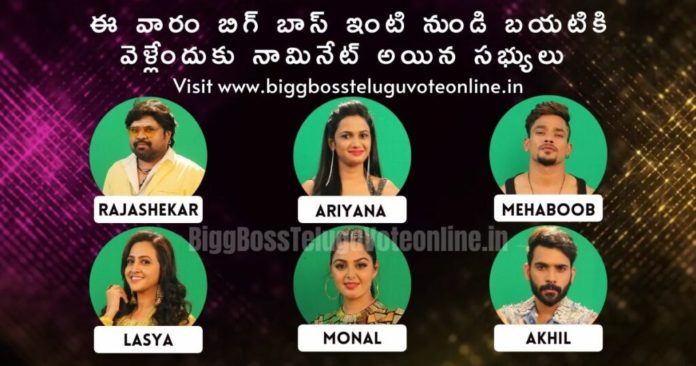 The eighth week of the grand Bigg Boss 4 Telugu has been going successfully. The tasks are creating a ruckus in the house everyday. Akhil , Ariyana, Monal and Lasya are the constant contestants nominated each time for the eviction process. However, The audience save them each week. There is a great positive support for Ariyana, Akhil and Lasya.

Six contestants have been nominated for week  8 elimination process. In the weekend episode, One contestant will be eliminated out of the six tough housemates.

contestants in the safe zone:

Contestants in the Danger zone:

Ariyana is known to be the true soul and people love her for who she is. However, The people’s love and support might make Ariyana reach finale if things go well. However, After Gangavva left, The fans of Gangavva have been greatly supportive of Akhil as well. Anyhow, Ariyana and Akhil appear to be the strong contestants.

However, Amma Rajashekar has the least votes closely followed by Mehaboob. Monal, Mehaboob and Rajashekar are in the bottom three since day 1 of voting. But it is hard to decide now which contestant will be eliminated since the voting poll has been unpredictable.

There have been a few elimination against the willness of the audience. Kumar Sai elimination created a massive outrage in the social media platform since he was one of the tough contestants in the house. Will that be the case this time also?

Follow Thenewscrunch for more updates on Bigg Boss 4 Telugu. Who do you think will get eliminated this. Comment below